History of the British Flying Wing

The tailless aircraft concept was present in Britain throughout World War II, and many of the designs came from Handley Page, Armstrong Whitworth, General Aircraft Ltd., and de Havilland.

The Handley Page Manx was designed by Dr. Gustav V. Lachman, and it had a single vertical fin on the rear of the fuselage, which was centrally mounted.

Its maiden flight took place on June 11, 1943, but the flight was aborted after ten minutes due to a lost canopy.

After various failures during test flights and little interest, the airplane was left behind in 1952.

General Aircraft Ltd. developed the G.A.L. 61, which had an all-wing concept with a retractable landing gear.

G.T.R. Hill proposed a research glider in the mid-1940s in order to study the control and stability of the tailless aircraft.

The glider had elevons, flaps, fins, and rudders at the wing tips, and the initial flights took place in 1946.

Two of the more important British designs were the Armstrong Whitworth A.W. 52 jet-powered flying wing and the de Havilland D.H. 108.

The de Haviland D.H. 108 became the first British aircraft to break the speed of sound.

The program had various accidents, but its outstanding performance was important for British aviation.

Tailless airplanes started to be developed over a century ago, but most of them only lasted a short amount of time before being abandoned.

A large amount of data was collected between the 1920s and 1930s, and there were many different approaches.

In 1876, he designed a revolutionary plane with concepts that were used for the next 100 years.

Penaud never was able to raise enough money for his research, and he committed suicide after his revolutionary concepts were met with skepticism and ridicule.

Clement Ader designed the Eole ten years later; it was a single steam engine tractor monoplane, and it had a bamboo propeller consisting of four blades.

The Avion III was finished in 1897, and it was similar in concept to Eole.

This aircraft had two engines and the wing structure was simplified.

Avion III was the end of Ader’s major work in aeronautics, but he did contribute to research on the air-cushion hydrofoil.

Danish inventor Jacob Christian Ellehammer is credited with designing and flying the first tailless aircraft in Europe on September 12, 1906.

Igo Etrich added a 24-hp engine in 1907 along with a pusher propeller.

Another Frenchman, Rene Arnoux, produced a series of tailless designs between 1909 and 1923, which included monoplanes, biplanes, pushers, tractors, low-wing, and mid-wing arrangements.

The Boland brothers designed a series of designs for tailless aircraft, and they became important players in U.S. aviation history.

Tailless aircraft was mostly put on hold during World War I, but it resurged once again in the following decades.

Jack Northrop wanted to develop a tailless craft, and he created the 1929 Flying Wing which had an all-metal, stressed skin, multi-cellular construction.

The project came to a halt but led to Northrop’s further development of all-metal constructed aviation projects.

In 1939, Jack Northrop created a new company called Northrop Aircraft after he was more interested in experimental design.

Northrop developed the N-1M (Northrop Model 1 Mock-Up) with a 38-foot wingspan, but it was a flying scale mock-up.

The N-1M went through many designs, and the working model was the first of its type with a tailless configuration to appear in the U.S.

Elevons were used together for pitch and roll control, and there was a plain split flap at each wing tip for rudder control.

The engineering and construction of the N-1M took one year, and the first flight took place in July 1940.

After a few more test flights, Northrop reported promising results to the Chief of the Air Corps.

By November 1941, many changes were made to the aircraft, and it had flown about 200 flights.

The test program was plagued by poor performance and engine problems, which resulted in various different approaches to somewhat common aircraft flight problems.

American engineers during the Depression began to experiment with the tailless aircraft.

Vincent J. Burnelli developed the CB-16 monoplane in 1928, and they were produced into the 1940s.

Similar to Burnelli’s monoplane, Jack Northrop’s 1929 Flying Wing was sent into the sky over the Mojave Desert, California.

The aircraft was designed by Northrop and W.K. Jay during late 1929, and the tests were conducted by Avion Corporation.

Anthony Stadlman joined Lougheed Aircraft Manufacturing Association in 1918, and he worked with Northrop to develop the monocoque fuselage, which was used successfully in the Lockheed Vega.

In August 1929, Stadlamn came up with the concept of the flying wing cargo and passenger aircraft, and he was considered a revolutionary designer.

Albert Merrill developed his first movable-wing biplane in 1926, but it faced financial difficulties.

Dr. C.L. Synder came up with three variations of the basic-disc shaped Arup S-1 powered glider, which made hundreds of flights during the mid-1930s.

The 1932 prototype was called “Whatsit,” and it led to the 1935 “Arrowplane” that was designed for the U.S. Department of Commerce Safety Airplane competition.

Towards the Northrop Bomber

The path towards the development of the XB-35 bomber included four N-9Ms.

There was little data collected, and the aircraft crashed after 22.5 hours of total flight time.

The pilot was killed, and it was determined that the aircraft had dangerous spin characteristics.

Important data was collected over the 23 hours of flight time that took place by April 1944.

The next model was the N-9MA, and it contained almost all of the design features that ended up in the XB-35.

The aircraft had great ground handling, responsiveness, and control.

The test program for the N-9MA was completed by October 1944, and the aircraft was used to train pilots in the Army.

During the same time, the N-9MB was almost finished.

It tested the improved systems and was later incorporated into the XB-35, and it included space for a passenger.

Japan was not so focused on developing aircraft during WWII as other powers, but they did have the glider designs of the Kayaba Works and the Mitsubishi.

The Japanese military-sponsored the Kayaba Gliders, which were developed as tailless aircraft.

Dr. Kimura later developed the KU-2 in the post-war years.

A single-seat model was developed with Kayaba’s Chief Designer Shigeki Naito, and it flew 270 total flights between October 1940 and May 1941.

The KU-3, a more advanced version of the KU-2, was created in 1941 by Dr. Kimura and designer Joji Washimi.

The KU-3 had no vertical control surfaces, and it was a two-place experimental aircraft.

The next step for Dr. Kimura was the powerful KU-4, but the Japanese Army decided against the project.

It wasn’t until 1944 that any serious tailless aircraft development resumed.

In response to the American B-29 Super fortresses, Japan developed the J8MI Shusui for the Japanese Navy, the Ki-200 for the Army, and the MXY-8 glider version.

The J8MI’s first flight took place on July 7, 1945, but the pilot died in a crash due to engine failure.

No more flights took place before the end of the war.

European Flying Wings Between The Wars

Rene Arnoux of France began experimenting again in the early 1920s, and he developed the Simplex-Arnoux tailless racer.

Prior to the aircraft taking part in the 1922 Coupe Deutsch race, it crashed in a landing attempt.

By the time the A5 model was developed, it had a tricycle gear and distinctive discs at the wing-tips.

The Pterodactyl Mk. IV is credited with being the first tailless aircraft to be spun, rolled, and looped.

Charles Fauvel of France was extremely influential in the development of tailless aircraft.

The Horten brothers developed their aircraft, including the three Horten gliders, in the pre-war years and became major innovators for flying wing designs.

Hill, Lippisch, and the Hortens were some of the pioneers of tailless aircraft in Europe during the 1920s-1930s.

The XB-35 would be a lot bigger than the B-17 Flying Fortress, with its wing area and gross weight almost three times more.

After the initial contract for one XB-35 airplane, Northrop received an order for an additional one as a backup in January 1942.

Later on in the year, 13 service test models were contracted to be designated YB-35.

The first XB-35 flew during 1947, but it faced problems with the landing gears, and the second one flew a year later with the same difficulties.

The second YB-49 crashed and was destroyed on June 5, 1948, caused by the failure of outer wing panels.

Northrop went on to develop reconnaissance versions of the B-49, and they created the XT-37 Turbodyne.

The B-35 series ended up having many difficulties, the B-48 had trouble with marginal directional stability that affected its bombing abilities, and the YRB-49A was outperformed, being dropped from the Air Force inventory in 1954.

The Horton X had an arrow-shaped flying wing, and the eventual powered version consisted of an Argus AS 10C pusher engine.

The Horten XI, built at Hersfeld, was an aerobatic sailplane with an 8-meter wingspan.

The H XII had a 100 hp engine, and its two seats were side-by-side.

The Horten XIII was developed as part of their program on high sweepback.

The accumulated flight time was about 10 hours, control was satisfactory, but it was still a bit slow.

The Horten XIV was a sports sailplane that adhered to the 1939 Olympic Games specification.

It was built for ease of production, and the craft was simple.

The Horten Parabola was a compulsive project, but that led to it being awkward due to its curves.

The glider suffered damage while being transported and never took to the sky.

A committee led by Professor Bock in 1945 deliberated over the design of a 4 jet engine bomber, and Horten’s aircraft was decided on.

It had the same top speed as others, along with more range and less landing speed. 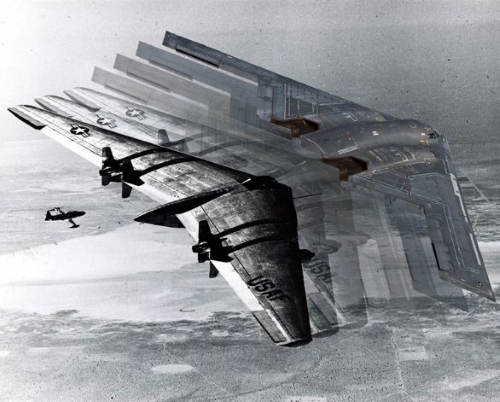 History of the Flying Wing

Our article discusses the history of the flying wing, from the very first flying wing to modern day aircraft.

2 Replies to “History of the Flying Wing”