Flying along on a beautiful clear day makes planning a safe landing a piece of cake. Avoiding controlled flight into terrain is easy when you can actually see the terrain!

Having to descend through clouds, however, can be a bit unnerving. Watching the altimeter unwind towards obstructions that you cannot see becomes easier to swallow when you are confidently on a glide path provided by a precision landing system.

A non-precision approach will provide you with the lateral guidance required to stay aligned with the centerline.

Planning your descent on a non-precision approach can be complicated and will require a precise awareness of where you are at on the approach.

Instead of descending at a constant angle and rate you will often level off intermittently as you “step down” on the approach.

As you step down you are constantly asking yourself “when can I make a safe normal landing” and “at what point do I accept a safe landing cannot be made.”

1. What is the Visual Descent Point?

According to the AIM, the Visual Descent Point is a “defined point on the final approach course of a non-precision straight-in approach procedure from which a stabilized visual descent from the MDA to the runway touchdown point may be commenced.”

Basically, the Visual Descent Point is the point at where you can descend to make a normal landing at the visual descent angle. This answers your question “When can I make a safe normal landing?”

You never want to descend below the MDA prior to reaching the Visual Descent Point. It exists to protect you from impacting obstructions or terrain.

You also never want to descend below the VDP before you have the runway environment in sight.

What exactly do I mean by “Runway Environment?”

Let’s use the FAR/AIM as a reference to answer that question:

2. Do all non-precision approaches have a VDP?

No, not all non-precision approaches have a VDP. According to the AIM:

A VDP may not be published under certain circumstances which may result in a destabilized descent between the MDA and the runway touchdown point. Such circumstances include an obstacle penetrating the visual surface between the MDA and runway threshold, lack of distance measuring capability, or the procedure design prevents a VDP to be identified.

In plain English that translates to say that the FAA is not going to depict a VDP if an obstacle prevents you from making a stabilized approach from the MDA or if there would not be a way for the pilot to identify the VDP if it was published.

Keep in mind that a VDA (Visual Descent Angle) does not guarantee obstacle protection below the MDA in the visual segment.

It is possible to come up with a quick calculation to ballpark the VDP.

This rough equation is based on a typical approach commencing at a 3 degree approach angle.

If you work out the trigonometry you would find that descending 3 degrees per NM equates to a descent of approximately 300 feet per NM.

Using this knowledge a “rule of thumb” calculation for computing the VDP is:

The visual descent point answers the question “When can I make a safe normal landing?”

For some aircraft “at what point do I accept a safe landing cannot be made?” is also the visual descent point.

If you are flying an aircraft that is going to require the entire runway to come to a safe stop you better not attempt a landing if you cannot see the runway at the VDP.

If you are flying a small airplane into an airport with a very long runway you can afford to land long.

In this case, you may consider maintaining your altitude at the MDA beyond the VDP, hoping to gain sight of the runway at the last second before the MAP.

Once you reach the MAP you will be forced to execute the Missed Approach Procedure.

The visual descent point is published on some non-precision approaches to make the pilot’s life easier when planning a descent.

It provides a readily identifiable reference point that allows a pilot to descend through the MDA and make a normal landing assuming they have the runway environment in sight.

You can also never go wrong for choosing to execute a missed approach at the Visual Descent Point.

Any time you start your descent beyond the VDP you will be landing long and the risks involved with committing to land go up considerably! 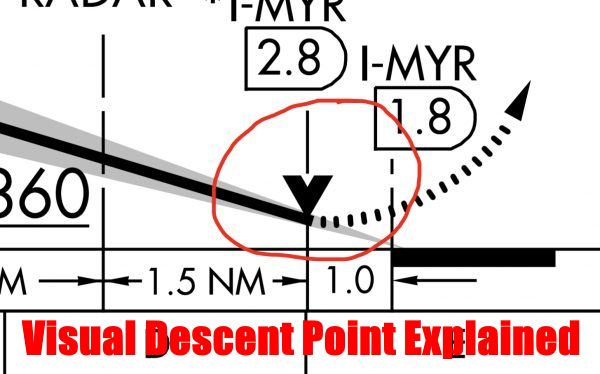 The Visual Descent Point, or VDP, is an aviation term used to mark the point on an approach where it's safe to start a descent to landing at a normal rate of descent.