Airplanes normally don’t fall out of the sky, and before a loss of control occurs, planes tend to do unusual things.

Usually, by the time the pilot realizes he has lost control, the plane is already in an unusual attitude, and quick reactions need to be made to ensure a safe transition to controlled flight.

Special Note: The below information is meant for informational purposes only, and should not substitute the info in your Pilot Operating Handbook (POH)!

What is an Unusual Attitude?

Normally, before a plane enters an Unusual Attitude, something called an “upset event” occurs.

This is an unintentional event, such as entering wake turbulence or encountering mountain waves, that knocks the aircraft from level flight.

The FAA definition of an upset is:

Unusual Attitudes exist within the definition of an upset, but are not inclusive.

For instance, upsets include stalls and overspeed conditions, and these are not included within the definition of Unusual Attitudes.

In general, bank and pitch angles that are unanticipated and out of normal flight parameters are considered Unusual Attitudes.

What would cause an Unusual Attitude?

There are three main causes of Unusual Attitudes, not including stalls. These are environmental factors, mechanical factors, and human factors.

It is known amongst pilots that Mother Nature can get moody and, at times, downright mad.

Weather events such as thunderstorms can cause wind shear, microbursts, and other nasty things that can cause upsets and lead to Unusual Attitudes.

Certain types of mechanical failures can result in Unusual Attitudes, such as asymmetric deployment of flaps, or a malfunctioning trim system.

In fact, a runaway trim system on the Boeing 737 MAX was the upset factor that caused the plane to enter a nose down Unusual Attitude and crash.

Faulty instruments can also lead to upsets, such as a malfunctioning attitude indicator.

Believe it or not, humans aren’t perfect, and can also malfunction at times.

Inattention and multitasking can lead to the pilot departing from a normal attitude.

If not properly trained, a pilot can also enter weather conditions that cause spatial disorientation which can also lead to entering an Unusual Attitude.

This was the cause of the JFK, Jr. crash in 1999 and occurred when he flew into Instrument Meteorological Conditions (IMC), even though he was not rated to fly on instruments.

He became disoriented and entered a bank, causing the plane to spiral down into the ground.

Related Article – Controlled Flight Into Terrain (CFIT): 6 Causes And How To Avoid It

How to Detect and Recover from an Unusual Attitude

If flying VFR, it’s normally very apparent when the plane is departing from its normal attitude, as the pilot will see either more sky or more ground than usual.

Or, the horizon can become askew in their windscreens, as well as a combination of both abnormal pitch and bank.

The instruments also give clues that something is not right, such as the attitude indicator departing from straight and level, or the turn indicator going sideways.

Other, subtle clues tell pilots something is wrong, such as the pitch of the engine.

In normal, level flight, the engine is turning a set RPM and emits a fixed-pitch hum.

If the pitch of the hum starts to lower, that means the engine is taking bigger bites of air and slowing down, indicating a climb attitude.

Once a pilot realizes they have entered an Unusual Attitude, corrective action must be quickly taken, and varies based on the attitude.

In general, the steps for recovering from an Unusual Attitude is to adjust the engine power, level the wings, pitch back to the horizon, and resume the flight.

This scenario can become dangerous, as a nose-low attitude increases airspeed, which can overspeed the engine and possibly exceed safe structural speed.

Increased speed coupled with bank can lead to increased structural loads on the airframe as well.

To recover from a nose-low left-turning Unusual Attitude, do the following:

Step 1: Reduce engine power by adjusting the throttle to avoid over speeding the engine and exceeding safe aircraft structural speeds

Step 2: Level the wings using coordinated aileron and rudder, rolling to the right

Step 3: Apply smooth back pressure on the controls to bring the nose back to level

Step 4: Once recovered from the Unusual Attitude, return to the original altitude and heading

This scenario, nose high and turning, is one of the leading causes of departure stalls.

A nose-high attitude can reduce airspeed, and a sharp bank angle can increase the speed at which the plane can stall.

This is dangerous, because an uncoordinated airplane that stalls can enter a spin, and the plane may not have enough altitude to recover.

Therefore, it is prudent to recover from a nose-high right-turning Unusual Attitude following these steps:

Step 2: Apply forward pressure to lower the nose and avoid a stall

Step 3: Level the wings using coordinated aileron and rudder, rolling to the left

Step 4: Once recovered from the Unusual Attitude, return to the original altitude and heading

How to Prevent Unusual Attitudes from Happening

There is a somewhat obscure term pilots use when flying, and that term is “staying ahead of the airplane.”

This means that the airplane is responding to inputs from the pilot.

The converse is “getting behind the airplane,” meaning that the pilot is responding to what is happening to the plane.

However, weather and mechanical issues can lead to sudden upsets, in which even the most skilled and attentive pilot gets behind the airplane and needs to react.

Luckily, Unusual Attitude Recovery is part of the Private Pilot curriculum, and is also usually practiced during a pilot’s Biennial Flight Review (BFR).

Losing control of an airplane is a leading cause of crashes and death.

Loss of control can stem from many factors, including weather, mechanical, and human factors.

A stray thunderstorm may create turbulence, leading to an upset that results in an Unusual Attitude.

Malfunctioning flight controls, like a faulty pitch adjustor, can also result in the aircraft entering an Unusual Attitude.

An inattentive pilot, fascinated more by his fancy new tablet than the horizon outside of the cockpit, can lead to a loss of control and entering into an Unusual Attitude.

Luckily, pilots are trained to recover from Unusual Attitudes, and recovery is done in a 4-step process.

The first step is to adjust engine speed based on pitch attitude, reducing engine speed in nose-down attitudes and increasing power in a nose-up attitude.

The second and third steps need to be changed based on the pitch direction, but they involve leveling the wings and adjusting pitch to become even with the horizon.

The final step is to return to the original altitude and heading the flight was on before the upset occurred.

As you have read, Unusual Attitudes can lead to dangerous situations, but by maintaining a cool head and reverting back to training, pilots can usually recover without incident. 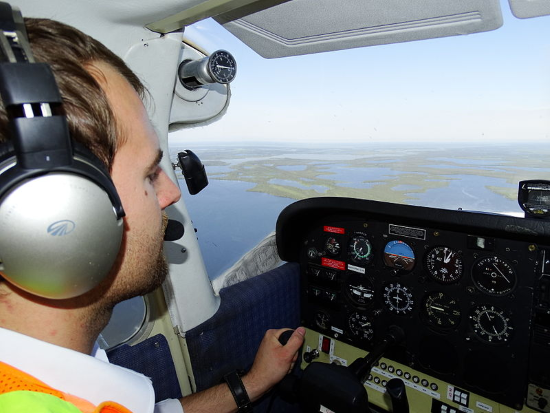 Learn how to recover from an Unusual Attitude, as well as what the leading causes of unusual attitudes are, how to prevent them, and much more.