Like runway markings, taxiway markings are standardized throughout the world.

A quick look at the layout of Atlanta Hartsfield International Airport demonstrates the need for clear and consistent markings and signs to allow flight crews to navigate to and from any one of the runways.

It is important that pilots understand taxiway and runway markings and signs.

Many airlines require pilots to be familiar with destination airports, meaning that a  pilot who has not flown into an airport such as Atlanta International must first fly with a pilot who is already familiar with the airport.

The angular taxiways adjoining the runways (Figure 1) allow aircraft to exit the runway at slightly higher speeds to expedite traffic, rather than having to slow to make a hard-ninety-degree turn.

Taxiways are the routes aircraft travel from and to passenger terminals and runways.

Air Traffic Controllers expect pilots to be familiar with the layout of the airport so that they can give the crew taxi instructions and be confident that they will follow the instructions correctly.

Each taxiway is marked by painted lines on the pavement as well as signs adjacent to the taxiways at key locations such as taxiway intersections and runways.

All taxiways have yellow centerline markings and hold position markings wherever the taxiway intersects a runway.

Unless cleared by Air Traffic Control (ATC, either tower control or ground control), aircraft must stop at all runway hold positions and hold until cleared to proceed (Figure 2).

The continuous yellow taxiway centerline, typically six to twelve inches wide; provides visual guidance along the center of the taxiway.

Ideally, the aircraft nosewheel(s) should be kept centered on this line during taxi; pilots must still be vigilant for other aircraft, vehicles, and potential hazards. 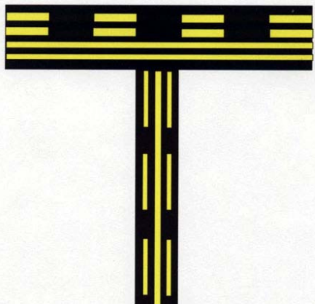 At some, mostly larger commercial airports, an enhanced taxiway centerline is used to alert pilots they are approaching a runway hold line.

Enhanced centerlines start no more than 150 feet from the runway hold marker.

Surface painted direction signs are located on the right side of the centerline indicating a turn onto the identified taxiway.

Surface painted taxiway holding direction signs have a red background with white lettering that identify the runway the taxiway is approaching.

The runway number sign has a red background with white lettering (Figure 5.)

Note that there may be hold signs on taxiways beyond the ends of runways—these require aircraft to wait for aircraft approaching the runway to land.

At key points along a taxiway, airports may post guidance signs to runways.

At large airports, Ground Control duties may be divided among two or more areas, each with its own controller.

“Frequency Change” signs, usually associated with a stop sign, will be posted along taxiways indicating that the ground control frequency should be changed at that point.

Often blacktop areas are used to stabilize the earth along taxiways to (1) prevent jet blast from blowing dirt and debris onto the pavement or toward aircraft behind them or (2) to indicate areas that will not support an aircraft.

Yellow stripes may be painted on stabilized areas to alert pilots that these areas are not intended to support aircraft (Figures 8).

These lines define the edge of the taxiway, but allow aircraft to cross them as necessary, for example, to turn onto a parking apron, etc.

Dashed taxiway edge markings consist of a pair of broken double yellow lines, with each line being at least 6 inches in width, spaced 6 inches apart.

These lines are 15 feet long; the spaces, or gaps, between the yellow pairs are 25 feet (Figure 9).

Geographic Position Markings are used to identify the location of taxiing aircraft during low visibility operations (RVR less than 1200 feet).

They are positioned to the left of the taxiway centerline in the direction of taxiing (Figure 10).

The geographic position marking, a circle with black and white outer rings and a pink circle in the middle.

It is designated with either a number or a number and letter; for example, ATC may request reporting when your aircraft is at “Position Marking A4” to confirm your position under poor visibility conditions.

There are two types of Hold markings (Figure 11):

(1) The first hold line (Detail 1, Figure 11) may be used when the airport is operating under VFR conditions and landing aircraft are NOT relying on the ILS for landing guidance.

(2) The second hold line is the ILS Holding Position Markings (Detail 2, Figure 11) used when aircraft are actively using the ILS for landing guidance (aircraft too close to the runway can interfere with the ILS guidance signal).

Busy commercial airports may have stop bar lights installed at the hold line.

They are used to confirm ATC clearance to enter or cross the active runway in low visibility conditions (below 1,200 ft Runway Visual Range).

The stop bar consists of a row of red, unidirectional, steady−burning, in−pavement lights across the entire taxiway at the runway holding position, plus elevated steady−burning red lights on each side (Figure 12).

A controlled stop bar is operated in conjunction with the taxiway centerline lead−on lights which extend from the stop bar toward the runway.

Direction signs are normally located on the left side of the taxiway, prior to the intersection.

When used on a runway to indicate an exit, the sign is located on the same side of the runway as the exit (Figure 13 shows a direction sign used to indicate a runway exit to taxiway A).

Navigating airport taxiways can seem confusing at first, but with just a little study, it becomes quite logical.

When flying into an airport for the first time—especially busy controlled airports—it is a good idea to go with another pilot who is familiar with the layout.

Still, understanding the signs and listening to the controller’s instructions, navigating an airport is usually not difficult.

At larger airports, controllers may provide a pilot with a sequence of taxiways to follow; it is a good idea, if possible, to quickly jot down the instructions.

Note: All graphics used in the article were taken from the current Airman’s Information Manual. 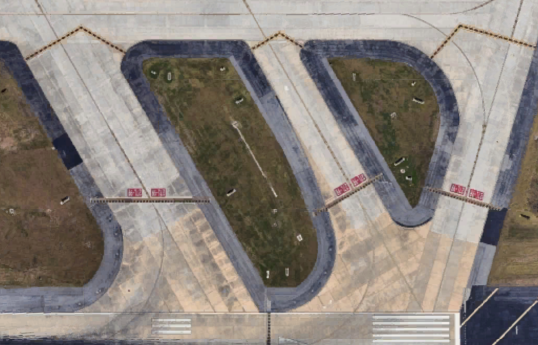