As pilots taxi to or from takeoff or landing, especially at major commercial airports, markings on the taxiways and runways provide important guidance.

Under normal operations, this guidance is mandatory, so pilots must recognize and know what these markings mean.

Here we describe the runway markings in approximately the same sequence the pilot would see them when preparing to takeoff.

In the aerial view of John F. Kennedy International Airport (Figure 1), we can see examples of most major portions of the airport.

There are the parking ramps, taxiways, and runways.

Movement in the parking area is controlled either by Ground Control, or at larger airports local ramp controllers.

When an airline aircraft is ready to leave the gate, the crew gets permission for “pushback.” The aircraft is guided by ground personnel away from the gate to a position where the pilots can taxi forward safely.

During this period, the pilot has received taxi instructions as to which runway to use and which taxiways to take to get to the runway.

To guide crews along this route, taxiways and runways are marked with standardized markings painted on the paved surfaces and further guided by signs.

To get to the runway, crews move along the assigned taxiways, following the yellow center stripe and all ground control instructions and taxiway signs until they reach the hold line at the assigned runway.

Along the way, crews must stop at all hold lines unless the ATC Ground Control clears the aircraft to move.

Assume the aircraft will taxi onto the runway and turn left to move into the takeoff position (Figure 2).

First, to the aircraft’s right is the blast pad (Figure 3): the purpose of blast pads is two-fold:

1. Jet exhaust is very harsh, and over time can damage the area surrounding the runway (i.e., the grass, dirt, gravel, etc.)

Blast pads protect the area immediately behind the runway threshold.

2. During an emergency, like a rejected takeoff (from the opposite direction), the blast pad becomes a stop way of additional surface on which to slow and stop the aircraft.

Blast pads may be constructed of an Engineered Materials Arresting System (EMAS) using materials that crush under the weight of an aircraft and “gently” slow and stop and aircraft that runs off the main runway surface.

Other Facts About Blast Pads

A demarcation bar is always associated with a displaced threshold. 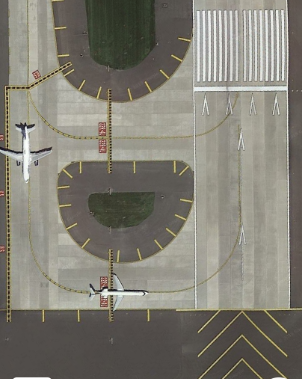 Other Facts About the Demarcation Bar

The demarcation bar is yellow and is not on or part of the runway.

A displaced landing threshold is located some distance from the beginning of the runway surface.

The displaced threshold is used to move an aircraft’s final approach or glide path down the runway so that aircraft will maintain a higher altitude approaching the runway, either for noise reduction or obstacle clearance.

Other Facts About Displaced Thresholds

A displaced threshold will reduce the available runway available for landing.

Aircraft taking off may use the portion of the runway before the displaced threshold.

A 3-feet wide white displaced threshold bar indicates the beginning of the landing portion of a runway (Figure 5).

Other Facts About Threshold Bar

The portion of the runway before the displaced threshold may be used for takeoff or roll-out when landing from the other direction.

White arrows (or arrowheads), beginning at the approach end of the runway, along the centerline, indicate that there is a displaced threshold beyond which aircraft should land (Figure 5).

Other Facts About White Arrows and Arrowheads

Aircraft taking off may use this portion of the runway.

Other Facts About Hold Markings

There are two types of Hold markings (Figure 6):

(1) The first hold line (Detail 1, Figure 6) may be used when the airport is operating under VFR conditions and landing aircraft are NOT relying on the ILS for landing guidance.

(2) The second hold line is the ILS Holding Position Markings (Detail 2, Figure 6) used when aircraft are actively using the ILS for landing guidance (aircraft too close to the runway can interfere with the ILS guidance signal).

Runway threshold markings are white stripes running parallel to the centerline of the runway just beyond the actual runway threshold (or displaced threshold) that help identify the beginning of the landing runway (Figure 7).

Other Facts About Threshold Markings

In some instances, the landing threshold may be relocated or displaced.

While landing on the threshold markings is not prohibited, it is not usually a good practice.

At airports with threshold markings, there may be aiming point markings: two wide, white, parallel areas that provide a visual reference for most aircraft. This is the point to aim for rather than the threshold markings.

For large airline aircraft, if the pilots use the “aiming point” accurately, due to the length of the aircraft, the wheels will touch down on or near the touchdown point.

Figure 8. Diagram of a runway showing the threshold marking, runway designation, and the aiming point.

Therefore, an aircraft approaching runway 20 would be flying a heading of approximately 200 degrees magnetic (the actual magnetic alignment might be anything from 196 to 205 degrees magnetic).

Other Facts About Runway Designation Markings

When there are two parallel runways, they will be marked with an “R” or and “L” indicating the “right” or “left” runway as viewed by the pilot approaching the runways.

Pilots must ensure they understand precisely which runway they are cleared to land on; at busy airports arriving aircraft may be flying parallel to each other, landing at nearly the same time on parallel runways.

The runway centerline is simply a white stripe down the middle of the runway.

Other Facts About the Runway Centerline

It provides visual guidance for alignment with the runway and following the line provides assurance that aircraft wheels will not roll off the edge of the runway pavement.

It is also an effective tool for flight instructors and examiners for evaluating a pilot’s landing proficiency!

Continuous side stripes provide a visual reference for the edge of the runway pavement and the abutting runway shoulder or material.

Runway markings are consistent from one airport to another, especially airports that are certified for commercial aircraft traffic.

The markings for different runway features have been standardized for many years.

Once familiar with these standardized marking a pilot will have no difficulty understanding when and where to stop and hold position, and how to plan takeoffs and landings, or, the next time you are flying on an airline, how to impress that attractive passenger next to you.

The best reference for any and all airport markings is the current Airman’s Information Manual, Chapter 2, Section 3,  or Airfield Standards, both available online. 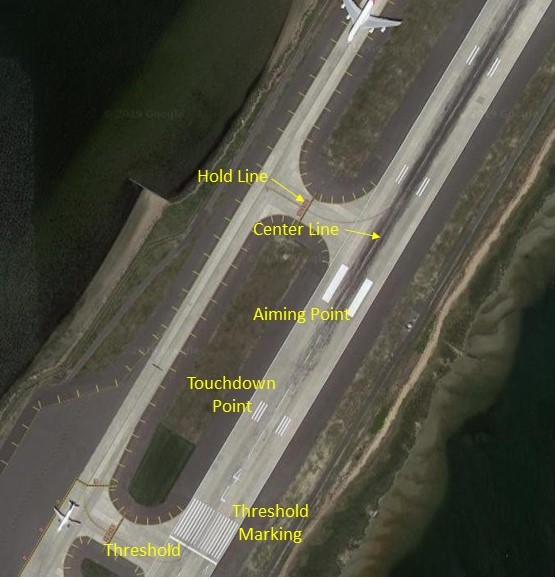