They post over a dozen new pilot jobs everyday, many of them low-time.

Right now, they’re offering a special limited-time offer of $1 for the first 2 weeks, and just $9/ month after that.

You can learn more on their website here: www.Airployment.com

Flying as a commercial pilot means you are permitted earn income as a pilot.

However, the Federal Aviation Administration (FAA) requires that you obtain a Commercial Pilot’s Certificate before you may be paid as a pilot.

The basic requirements for becoming a Commercial Pilot include:

Note, while an instrument rating is not required to obtain a Commercial Pilot Certificate, without it, commercial flight operations are restricted to flights of no more than 50 nautical miles from the airport and only during daylight hours.

Most pilots whose goal is a career as a professional pilot will begin work on their instrument rating after earning their Private Pilot Certificate.

Once you have your Commercial Pilot Certificate, what can you do to build time and experience that will allow you to achieve to your aviation career goals?

Here are some possibilities.

Becoming a Certified Flight Instructor (CFI) is often the first step to for a career pilot.

It’s one of the most common entry level pilot jobs in the United States, and was the first pilot job I ever had.

By the time you have earned your Commercial pilot Certificate, you should have accumulated enough knowledge and experience to be a Flight Instructor.

Of course, becoming a flight instructor involves additional training in teaching techniques and learning to fly from the right seat, while demonstrating and explaining what a student pilot must learn.

Once you have your Commercial certificate, assuming you have satisfactorily completed your flight instructor training, all you have to do is take and pass the CFI knowledge test and check ride and you are ready to go to work.

The advantage is that once you become a fully qualified CFI/CFII, you have obtained all of the basic aeronautical skills required to move up into any commercial position—the only significant additional requirements are building the required flight time, and honing your skills and knowledge for the Airline Transport Piot (ATP) certificate.

Flight instruction is an excellent way to build flight time, especially if you can obtain a job at an active flight school.

While there are many dedicated career flight instructors, most pilots become instructors to build their own time and experience so that they can move on to other flying careers.

According to a recent Government Accounting Office (GAO) report, “pilots who plan to move up to an airline career will work for a year or two as a flight instructor rapidly building flight time.”

After accumulating 1500 hours, the pilot will be ready to work on the ATP.

Applicants for the ATP must be 23 years old. Note, there are programs that allow pilots to qualify for their ATP rating at age 21, with only 1000 hours.

Average CFI Pay: The fact is, flight instruction is an experience and time-building opportunity for young pilots.

Many flight training schools employ upperclassmen with CFIs as instructors paying them at the lower end of the pay scale, but they may offer more hours on a more dependable schedule than working at a local airport.

There are many more colleges, universities, and flight training academies, most of whom are constantly replacing instructors who have graduated and moved to full-time flying jobs.

Find more sources of flight instruction by searching the Internet for Flight Training Colleges and Academies.

Not every pilot is cut out to be an instructor, but that does not mean that he or she cannot make a very good commercial or airline pilot.

Therefore, another way to build flight time is flying Pipeline and Powerline Patrols.

These pilots usually fly for an aviation company that contracts survey services to pipeline and utility companies.

Pilots fly at lower altitudes over power lines or pipeline routes, looking for signs of damage, leaks, or to find the cause of reported outages.

These pilots take extra care to preflight their aircraft and to plan flights, so they know the locations of alternate airfields.

Pilots working for these agencies may also conduct other flights including flight instruction—if qualified—or transport equipment and personnel from one site to another.

So even if your object is a major airline, once you have acquired the time, you can transition back to fixed wing aircraft in pursuit of your flying goals.

Average Pipeline Patrol Pay: According to ZipRecruiter, pipeline patrol pilots earn between $23 and $50 per hour with a median hourly rate of $40.

Working with an active aerial survey contractor can be good way to build time.

Examples of companies that hire Pipeline and Powerline Patrol Pilots

What is Aerial Surveying / Mapping?

Aerial survey is a method of collecting images of specified areas using aircraft.

Aerial survey aircraft may be equipped with aerial photography, Lidar, infrared sensors and other sensing or imaging equipment.

Aerial survey is different from satellite imagery because it provides higher resolution and better detail in near-real-time images.

Surveys may be conducted for many reasons including environmental studies, projected pipeline routes, archeological studies, etc.

Typically, cameras or other sensors are mounted in or on the aircraft.

Pilots usually must fly planned routes over target areas at specified altitudes to accomplish the objectives of the aerial survey.

Single or multi-engine aircraft may be used.

Due to the nature of the equipment, pilots may be expected to have computer or other technical skills to ensure proper operation of the imaging equipment and that the quality of the imaging meets the survey requirements.

One aerial survey company’s recruiting message includes: “You can expect to fly at least 400 hours per year and travel, as necessary, for the company.

Our fleet consists only of high-performance aircraft and our exciting projects may require you to travel anywhere in the Eastern United States and the Caribbean.” (Pickett and Associates, Inc. – Bartow, FL)

Annual salaries for full time survey pilots range between $59,000 and $100,000 depending upon experience.

Banner Towing or Aerial advertising is a form of advertising that uses manned aircraft to tow display advertising banners over populated areas such as major sporting events, beaches, or busy amusement parks.

Banner towing is usually closely controlled by both local and federal regulators.

Most banner tow aircraft are single-engine aircraft that have been outfitted with capture hooks to pick up banners, and release mechanisms to drop the banner at the end of the flight—or in an emergency.

Banner towing does involve some special skills, including picking up the banner to begin the flight and releasing the banner at the end of the flight.

Also, since the objective is to have people on the ground see and understand the advertising message, banners are usually towed at a slower speed than normal cruising speed.

For pilots who enjoy low, slow flying, it is a good way to build basic flying time while earning an income.

Many agencies know that young pilots want to build time and will pay as little as necessary.

Higher pay rates apply when the towing operation is over populated areas or special events such a major sporting event and operators want to use more experienced pilots.

According to the Federal Aviation Administration (FAA) Aviation Safety Program publication, P-8740-62, there are more than 300 active skydiving centers and clubs in the United States served by more than 500 skydiving aircraft, or “jump planes.”

Experienced jump pilots are in high demand to help keep these aircraft flying, but this is also an unusually demanding job and training and preparation are important.

Skydive operations typically fly out of private airports away from busy airways.

Skydive operations tend to be seasonal, with busy seasons depending on local weather. Northern skydive locations are usually closed in the winter.

Southern locations are open, but the loads/work is less during the off season. Having actual skydiving experience can be helpful but is not necessary.

Skydive pilots are usually paid per load carried and can build many hours of flight time quickly during the jump seasons.

Although the Cessna 182 has been the most common jump plane, the de Haviland Twin Otter and Shorts Skyvan aircraft are becoming more common.

Average Skydive Pilot Pay: Most skydiving companies pay pilots by the load, that is each flight that carries jumpers.

According to the Bureau of Labor Statistics, “Overall employment of airline and commercial pilots is projected to grow 6 percent per year from 2018 to 2028, about as fast as the average for all occupations. Most job opportunities will arise from the need to replace pilots who will retire over the projected period.”

That means that the pilots now instructing, towing banners, flying aerial survey flights, etc., are likely to be move into transport category aircraft within the next two or three years.

Consequently, there will be a constant demand for instructors, and other pilots described here.

Once you have obtained your commercial certificate, and especially if you have an instructor rating, put together a brief resume of your time, ratings, types of aircraft flown, and any other relevant aviation experience.

Make sure to leave a resume at any airport or flight operations where you would consider working.

If possible, check back periodically, every three to six months.

In the current market where there is a high demand for professional pilots, jobs like those described above are opening continuously. 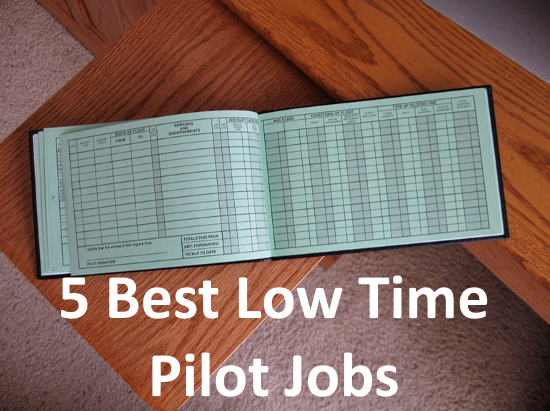 There are plenty of jobs for low time pilots, you just need to know where to look. In this article, we'll explore the various types of low time pilot jobs available, as well as other details.