Before World War I, there were no planes capable of flying from Newfoundland to Ireland. This was the shortest route across the Atlantic Ocean.

Because Northcliffe realized how difficult the journey would be, he allowed planes to land on water, stop in the Azores for refueling, and be towed for repairs along the way.

As soon as the announcement was made, numerous groups prepared to claim it.
In England, Glen Curtiss, President of Curtiss Aeroplane and Motor Company, immediately began designing a seaboat for the challenge.

Curtiss named his plane the America and prepared to fly it to Newfoundland to attempt the transatlantic voyage.

But World War I put a stop to all plans to cross the ocean by plane. But the Allied armies were so taken with Curtiss’ plane that they ordered several of them for the war effort.

By the end of the war, Curtiss’ planes had been dubbed “NC,” for “Navy-Curtiss.” They were colloquially called “Nancies.” 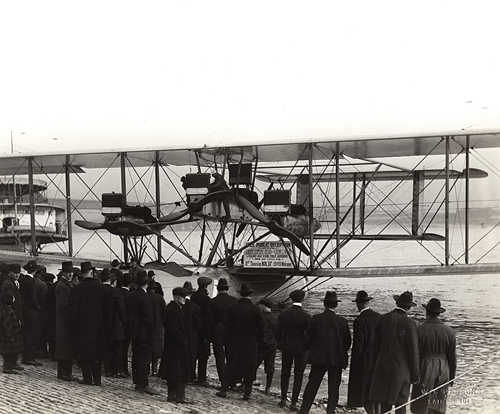 The NC-4 got its name from the collaboration of the U.S. Navy and Glenn Curtiss during World War I. Source: WikimediaOver the course of the war, Curtiss had added a fourth engine and designed a stronger and sleeker hull.

In 1919, the U.S. Navy decided to attempt the transatlantic flight with a group of three Nancies.

The NC-4 crashed only 80 miles off the coast of Massachusetts and had to be towed to the Naval station at Chatham. After 6 days, Read continued his flight to Newfoundland, where the NC-1 and NC-3 were waiting for him.

On May 16, 1919, the three planes took off from Newfoundland. Navy destroyers had been stationed across the Atlantic to aid the planes should they have to make an emergency landing.

Bad weather and unreliable radios made navigation almost impossible for the pilots. Bellinger and Towers decided to land on water to attempt repairs.

Bellinger’s crew and his damaged plane were spotted by a Greek freighter and rescued quickly. but the crew of the NC-1 were lost at sea for 3 days before strong winds blew them into Horta Harbour in the Azores.

Unlike the NC-1 and NC-3, Read and his crew did not have to stop on water along the way and arrived in the Azores on May 17. They anxiously awaited repairs to the other two planes to be completed to finish their flight to England and claim the Northrop prize.

Read knew that two other crews in Newfoundland were getting ready to try the transatlantic crossing, and they could still beat him to the prize.

But both crews failed. One never made it past takeoff, and the other had to abandon the attempt over the mid-Atlantic.

Thus, Read was able to first fly from the Azores to Lisbon, Portugal, and then to Plymouth, England.

On May 31, he became the first person to successfully cross the Atlantic Ocean by plane.

Unfortunately, the flight of the NC-4 was quickly forgotten, as bigger and stronger planes accomplished more and more difficult feats over the next decade.