Glen Curtiss developed the first float-plane in 1912, and he produced more than 7,000 JN Jenny’s in World War I.

The Navy-Curtiss 4 made the first staged aerial crossing of the Atlantic in 1919.

The aircraft became more militarized due to World War I nationalism.

In 1931, Britain’s Supermarine S.6B became the inspiration for the notorious Spitfire.

Towards the end of the 193s, forty-two Short Bros’ S23 Empire Flying-Boats were built for the British Empire for travel.

The first two trans-Pacific seaplanes were the Sikorsky S-42 and the Martin M130, and the Boeing B-314 came after.

The Boeing PB-1 (1919) is considered the first commercial seaplane, and the first large flying boat airliner was likely the Caproni Triplane 1919.

In 1928, Savoia Marchetti Sm-66 was built for trans-Mediterranean airline services.

The Consolidated PBY-5 Catalina (1937) was one of the amphibian flyboats used by airliners during the war.

The Saunders-Roe Princess (1952), was the last of the large flying boats designed by airliners.

These are just some of the highlights of the flying boat era.

After World War II, there was a transition away from these types of aircraft, bringing the flying boat airline era to an end.

The “Junkers F-13” is considered the first modern commercial aircraft, and it’s design paved the way for others.

The passenger cabin is closed and capable of holding four people, there are upholstered seats, heating, and illumination.

The wing has a deep profile, and it is a low-wing cantilever monoplane.

The aircraft is made completely of a light metal alloy (duraluminium), and it is covered in corrugated sheet metal

There is an open cockpit with space for two pilots.

The first flight took place in June 1919, and more followed with higher altitudes.

The F-13 was responsible for much of the development of air traffic in the 1920s.

The aircraft kept getting updated, and it resulted in the eventual three-engined commercial aeroplane Junkers Ju 52/3 m built in 1932.

The F-13 itself was the result of further development of the Junkers W 33 freight plane.

It was a small single-engined monoplane.

The development of the Solent came from the Short S. 45 Seaford and the Sunderland.

The first aircraft produced was the Seaford, and 12 aircraft were used for BOAC service afterwards.

Solent II’s could hold a crew of seven and 30 passengers.

In 1948, six unfinished Seafords became Solent III’s, and they were able to carry 39 passengers.

BOAC ended its flying boat journey two and a half years after BOAC Solents went into service.

The aircraft went into storage, and production ended in 1951.

It is best remembered for the services it provided as the final flying boat type operated by TEAL.

The PBY was also used to attack ships at night and perform search and rescue missions.

At the start of the war, the PBY Catalina wasn’t considered an important aircraft, but that quickly changed.

It had great range and durability, which impressed many American aviators and flight crews from Allied nations.

The Consolidated Aircraft Corporation was founded by Reuben Hollis Fleet, in May 1923 in East Greenwich, Rhode Island.

Modified versions of the aircraft were built by the Naval Aircraft Factory, and Boeing Aircraft of Canada produced the PB2B-1 and ‘-2.

Canadian Vickers Ltd. built the Casino to be used by the Royal Canadian Air Force, and the OA-10A was used by the U.S. Army Air Forces.

The PBY-6A was the final development model of the PBY Series, and it had a new radar, twin .50 caliber guns, and a new tail.

PBYs continued to be used after the war for commercial operators.

It came after it was believed that flying boats were the best means for the UK to America route.

Prior to the war, there were already attempts by Imperial Airways to cross the Atlantic without stopping.

The aircraft was designed to carry 100 passengers and cruise at 395mph.

The Saunders-Roe Princess was said to be the best flying boat ever constructed, and they went up against the world’s best liners.

Three were commissioned in 1950 after the cost rose drastically.

It wasn’t until two years later that one flew, but it was said to be an impressive sight.

Airlines eventually decided not to order any, even with the advanced fly-by-wire control that the aircraft had.

The only completed Princess was towed up the River Itchen to be demolished.

The aircraft struggled against the rising level of competition, and it was not able to hold on.

The Caproni CA-60 was created as a cross between a plane and a house-boat in 1920.

The massive craft had three sets of triplane wings from WWI bombers, and it could hold 100 passengers.

The wings were 9,000 square feet, and they had ailerons and elevators in the rear.

Caproni CA-60 was powered by eight 400 hp American Liberty engines, which was ten times the average passenger aircraft at that time.

The aircraft flew for the first time in 1921, and it reached a height of 60 feet.

It collapsed and fell into the lake right after takeoff, and both pilots died.

After undergoing repairs, it was destroyed in a fire, but that is disputed by some.

It was a prototype for a 150 seater that was designed to cross the Atlantic.

They served as a link between Britain and Australia, and the two models were the S.23 Imperial Flying Boat, and the S.25 Sunderland.

It launched on July 2 and entered into service in October.

The Empire flying boats also flew a trans-atlantic service via Ireland and Newfoundland.

A weekly service from Southampton to New York began in August 1939 with the flying boats G-AFCU ‘Cabot’ and G-AFCV ‘Caribou.’

The service ended in September 1939.

The aircraft were able to outperform the DC-2s form Australia, leading to their acceptance.

During WWII, the air route from England to Australia was diverted.

The route was eventually canceled and reopened after Japan lost Burma and Malaya.

The VH-ABG ‘Coriolanus’ was the first Qantas aircraft to enter liberated Singapore.

It was the last Empire flying boat in operation in the world.

The Do X was a twelve-engined flying boat designed by Claude Dornier.

He was especially concerned with the dimensions and weight, and he wanted to use specific material and construction techniques like the Dornier combination of light alloy and steel.

He also liked a semi cantilever monoplane design, an arrangement of engines, and a stable hull with floats on each side.

A new design feature was the division of three decks.

The upper deck contained the navigation and radio room, and the main deck had seating for 66 passengers.

New engines were put in, and new flights started on August 4, 1930.

It toured through Europe. The west coast of Africa, and then to North America.

The impressive flying boat was sent to the Museum of Aviation in Berlin in 1934, and it was destroyed by air raids in 1945. 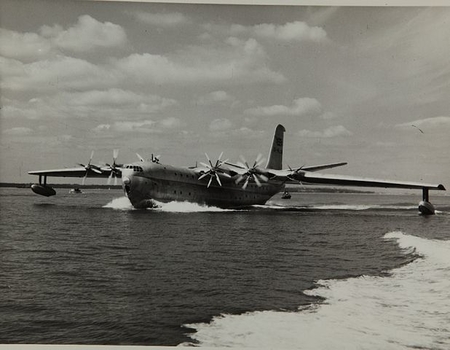 The history of the flying boat is an interesting one that dates back to the early 1910's. Learn more about how it all started here.