He was the first to theorize and design rockets for space travel, orbital research and intercontinental ballistic missiles. He has been called the man who started the space age. Much of his research he kept private due to early ridicule by the media.

Goddard didn’t find financial support from the government between the World Wars. He was funded by the Guggenheim family from 1930 to 1934. During World War II he worked for the Navy in Annapolis, Maryland.

Goddard developed many innovations during his rocket experiments. Germany was inspired by the news of his work and incorporated his ideas into their V-2 rocket program during World War II.

Goddard was born October 5, 1882 and died on August 10, 1945. NASA named the Goddard Space Flight Center in Maryland in his honor in 1959. There is a memorial and statue of Goddard at the location he launched the first liquid fueled rocket in Auburn, Massachusetts.

On May 5, 1961 Alan Shepard piloted Freedom 7 to become the first American in space. The mission known as Mercury-Redstone 3 whose goal was to launch an astronaut into orbit and return him safely. Freedom 7 was built by McDonnell Aircraft Corporation in St. Louis, Missouri.

The Mercury-Redstone 3 rocket carried Freedom 7 to orbit from Cape Canaveral, Florida. An estimated 45 million Americans watched the launch at 9:34 Eastern Time. The launch was successful and Alan tested the spacecrafts control systems and retrorockets. The mission was short only covering a distance of 300 miles and attaining an altitude of 116 miles. The duration of the space flight was 15 minutes, 22 seconds.

The capsule re-entered the atmosphere, deployed a parachute and landed near the bahamas. The pilot and capsule were recovered by helicopter and returned them to the aircraft carrier USS Lake Champlain. The recovery took just 11 minutes from splashdown to arriving on the carrier deck.

Freedom 7 is on display in Boston at the John F. Kennedy Library.

NASA’s Gemini Space Program spanned between the Mercury and Apollo projects, between 1961 and 1966. Gemini missions had two Astronaut crews. Gemini’s goal was to develop and perfect techniques needed for future Apollo missions to the Moon. These tasks included mission durations matching traveling to the moon and returning to Earth, space walks, rendezvous and docking with a second craft. 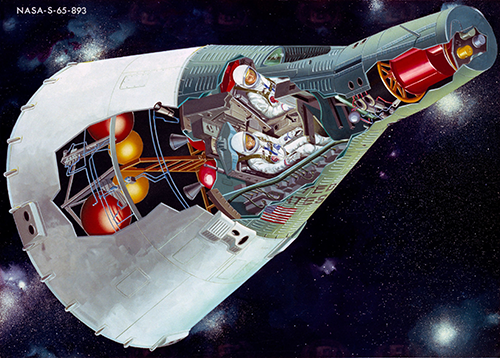 The first two Gemini missions were launched without crews for testing. These missions occurred in 1964 and 1965. There were ten crewed Gemini missions from 1965 to 1966. During Gemini 4 in 1965 Ed White made the first space walk. Gemini 5 lasted 8 days in orbit to test the effect on the crew during the time needed to get to the moon and back. Gemini 8 completed the first space docking with another spacecraft, the Agena target vehicle.

The Gemini Space program developed many advances that were used during the Apollo program to get to the Moon.

Apollo 12 was launched on November 14, 1969 from Cape Canaveral, Florida. It was crewed by Commander Charles Conrad, Jr., Command Module Pilot Richard Gordon, and Lunar Module Pilot Alan Bean. Apollo 12 was the second mission to land on the Moon just 4 months after Apollo 11.

The Apollo 12 lunar module Intrepid made a successful descent and landing to the Moon on November 19, 1969. Conrad and Gordon landed on the Moon while Bean manned the lunar module. The target landing site was near the location of the Surveyor 3 probe. Surveyor 3 had touched down on the moon in 1967. The targeted landing was a success. The Astronauts were within walking distance of the probe. Conrad and Bean removed parts of the probe to be brought back to earth for scientific analysis.

Apollo 12 brought an improved color video camera to the Moon. An improvement over the monochrome video camera used in Apollo 11. When Bean was setting up the camera he accidentally pointed it directly at the Sun. This destroyed the internal imaging components of the camera ending television coverage of the mission.

The astronauts also collected Moon rocks and setup equipment for measuring seismic activity, magnetic fields and solar winds on the Moon. After returning from the lunar surface and docking with the command module the ascent stage was jettisoned and crashed into the Moon. This was done to test the seismic sensors the astronauts had placed on the moon. The sensors detected the impact and vibrations continued for over an hour.

On their return trip from the Moon to Earth, the crew were able to view and video the Earth eclipsing the sun. They splashed down in the Pacific Ocean on November 24, 1969 concluding a successful mission.

The US Space Shuttle concept began with the release of a joint study by the Air Force and NASA in 1966. NASA reviewed 29 designs for a reusable shuttle system. In January 1972 the shuttle program was approved and the final design was decided in March. Construction of the first shuttle began in 1974. This shuttle named Enterprise was for flight testing and landing and was not built to be launched into space.

The shuttle system consists of a reusable orbiter, the shuttle, an expendable large external fuel tank, and reusable solid fuel rocket boosters. The rocket boosters were recovered after each launch and refurbished and reused for multiple missions. The large external fuel tanks broke up on re-entry with debris landing in the ocean and were not recovered.

The shuttle system is officially known as the Space Transportation System (STS). Five operational shuttles were built. They were the Columbia, Challenger, Discovery, Atlantis and Endeavour. They flew 135 missions with the first in 1981 and the last in 2011. They were used to launch satellites, space probes, the Hubble Space Telescope and take supplies and Astronauts to the International Space Station.

The Shuttle Challenger was lost during launch on January 28, 1986 when seal failed in an O-ring in one of the solid rocket boosters. It allowed hot gas to escape burn through the large external fuel tank leading to a catastrophic failure killing all seven astronauts on board.

The Shuttle Columbia was destroyed during re-entry on February 1, 2003. During launch a piece of insulating foam shed from the external fuel tank struck the leading edge of the wing damaging it. During re-entry this allowed hot gases to enter the wing causing the shuttle to disintegrate on reentry over Texas. All seven astronauts on board were killed.

The accident was caused when an O-ring failed in one of the joints in the right solid rocket booster. Hot gas escaped from the failed seal and burned through attachment hardware causing a structural failure and the disintegration of the orbiter and the death of all seven crew members.

Nasa held a call with NASA and Thiokol the night before the launch. Thiokol engineers pushed for delaying the launch as they had no test information for the O-rings at that low temperature. During a second call with NASA and Thiokol there were discussions that the secondary O-rings could be depended on if the primary ones failed and it was decided to continue with the ill fated launch.

After the NASA call the night before launch Bob Ebeling told his wife about the O-rings and that the shuttle would blow up the next day during launch.

During launch a piece of foam approximately 2’ x 2’ fell from the large external fuel tank striking the wing of the Columbia. This was determined by analyzing video footage the day after the launch. Previous shuttles had an issue with foam shedding and it wasn’t considered to be an issue that would affect the mission or re-entry.

This time the foam strike made a 6” to 10” hole in the wing. This would allow hot gases to enter the wing during re-entry. The re-entry was treated as a normal re-entry by NASA they weren’t concerned about the wing or any other issues.

During re-entry amateur observers on the ground in California noticed debris being shed by the Shuttle and that it looked different than other re-entries they had watched. Shortly there after the Columbia became brighter and a glowing streak followed it. Over texas the Columbia disintegrated. The debris trail was picked up by the regional weather radar as a red and yellow band extending from texas into Lousiana. The crew is believed to have perished in less than 60 seconds.

Scientists focus of study was initially on planets and moons. As they completed their exploration of these bodies with space probes they began to expand their focus to smaller space bodies known as planetesimals. These are smaller space bodies such as asteroids and comets.World scientists are devoting more study to these objects as they offer a glimpse into the formation of the solar system.

Halley’s comet gave scientists a great opportunity for study. The Euorpean Space Agency launched the Giotto probe to study the comet. It was the first probe to make a close observation of a comet. The probe came within 600 kilometers of the center of Halley’s comet.

The world space organizations are planning more visits to comets and meteors. There is also interest in mining asteroids. There are estimates that asteroids can each contain trillions of dollars of valuable metals.