I recall reading an article in AOPA magazine titled NASCAR drivers fly too! The article went on to discuss how a lot of NASCAR drivers also have pilot certificates.

This didn’t surprise me. Why is that? Because flying airplanes can be similar to driving in NASCAR. One of those similarities involves the tendency to make a lot of left turns.

This article will discuss why an airplane has an inherent tendency to turn to the left due to 4 factors.

Torque effect is one of the 4 factors that causes the airplane to turn left.

Sir Isaac Newton stated in his 3rd law that for every action there is an equal and opposite reaction.

In most single engine airplanes the propeller rotates clockwise (as viewed from the pilots perspective).

This means that there is an equal and opposite force wanting to roll the aircraft counterclockwise.

On the ground this counter rotating force applies pressure on the left main wheel.

The tire being forced into the ground creates more friction which will turn the aircraft left during the takeoff roll.

In the air the left turning tendency attempts to roll the aircraft around the longitudinal axis.

This tendency is offset during the engineering of single engine airplanes.

Older aircraft were rigged to create more lift on the wing being forced downwards.

Modern aircraft are designed with the engine slightly offset.

Aileron trim tabs can help offset rolling tendencies even further if they are available.

Keep in mind that the control surfaces need enough airflow to be effective.

There have been accidents caused by airplanes entering “Torque Rolls” inadvertently.

This usually happens when an experimental aircraft builder puts a turbo-charged engine on a small airframe.

The turbo-charged engine compresses air which allows it to perform at high altitudes.

The airframe will eventually lose it’s ability to offset the counterclockwise motion as the controls lose effectiveness in the thin air.

The aircraft will begin spinning along the longitudinal axis.

Here is a video of an aerobatic pilot demonstrating a torque roll:

The P in P-factor references the propeller.

Think of the propeller as a wing that is rotating in front of the airplane.

The blade of the propeller is curved in such a way that the angle of attack is greater when the blade descends.

As mentioned when we discussed torque, the propeller rotates clockwise.

Since the descending blade (on the right side) creates more lift, the lift is not centered in the propeller arc.

The lift is offset to the right, which yaws the aircraft to the left.

This is most easily felt at high angles of attack.

Spiraling slipstream describes the way the air flows around the aircraft behind the propeller.

The air leaves the propeller on the left side of the aircraft.

The air flows over top of the airplane past the right wing (causing a slight rolling motion to the right).

The air then flows underneath the airplane and wraps around it striking the left side of the vertical stabilizer.

This force often overcomes the slight right rolling tendency and is yet another force that yaws the aircraft to the left.

Gyroscopic precession is something all pilots should be familiar with.

Precession is the resultant action, or deflection, of a spinning rotor when deflecting a force applied to it’s rim. When a force is applied, the resulting force takes effect 90 degrees ahead and in the direction of rotation (Reference: Pilots Handbook of Aeronautical Knowledge).

Basically, precession applies to forces acting on a spinning object (such as a propeller).

Gyroscopic precession explains how it is possible to ride a bicycle with no hands.

Imagine riding a bicycle and you lean to left.

The force is actually felt 90 degrees in the direction of rotation (due to precession).

So instead of your bicycle leaning to the left and resulting in you toppling over and scraping your knee, the bike instead responds by turning to the left.

The same thing applies to the propeller in tailwheel airplanes.

Airplanes with a tailwheel pitch their propeller down as the tailwheel raises up.

That can be thought of as someone pushing the top of the propeller forward.

The force is felt 90 degrees in the direction of rotation, as if someone is pushing on the right side of the propeller.

This creates a left turning tendency.

The opposite is true for tricycle gear airplanes.

In tricycle gear airplanes precession actually causes a slight right turning tendency, that can help offset some of the left turning tendencies created by the other forces.

The left turning tendencies will be felt the most in tailwheel airplanes.

They will be felt less in tricycle gear airplanes as precession becomes less of a factor.

As you transition to multi-engine airplanes you will need to pay close attention to how your propellers are designed.

Some multi-engine airplanes will have counter-rotating propellers to limit the left turning tendencies.

The common theme is propeller.

So obviously, transitioning into a jet aircraft will come with all kinds of new challenges, but at least the left turning tendencies will no longer be a factor! 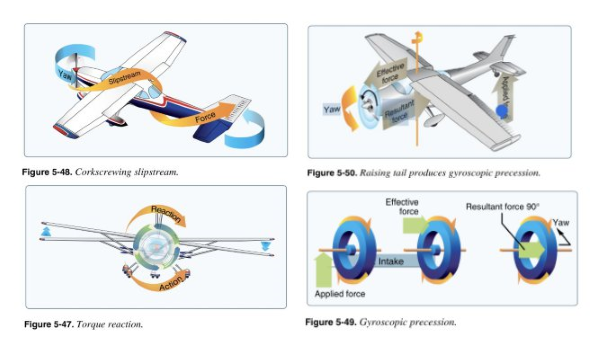 In aviation, there are 4 types of left turning tendencies in single engine aircraft. Learn more about each, including it's causes and how they're counteracted.