Most flights go smoothly, without issues. However, mechanical devices have their limits, and sometimes electrical components, like radios, fail.

What happens if you fly out of a towered airport, but your radio fails? Are you able to get back to the airport without communications?

What if your radio is broken, but your airport doesn’t have an avionics shop? Can you depart without a working radio?

The simple answer is yes, you can!

All control towers have light guns they can shine at aircraft that are having communication issues.

The light guns are very bright, able to be seen for several miles, and consist of three different colors, red, green, and white.

There are 6 different types of light gun signals and can be used on the ground or in the air.

What are the different signals, and what do they mean?

Keep reading to understand everything you want to know about Light Gun Signals!

The 6 Types of Light Gun Signals

As previously mentioned, the three colors of a Light Gun Signal are red, green and white.

They can be steady, flashing, or even alternating colors, and each has a specific meaning, depending on whether you are in the air or on the ground.

The table below demonstrates each one of these signals, but we’ll get into a more detailed discussion further along in the article:

If you have a radio failure, make sure you don’t forget to set your transponder to 7600, which alerts ATC to the fact you aren’t able to communicate via radio.

Because two-way radio contact is required to enter Class C airspace, pilots are not allowed to land with an inoperable radio.

For Class D airspace, the rules are more relaxed, and as long as the pilot goes with the flow of traffic and maintains visual contact with the tower, the pilot can enter the airspace to await the Light Gun Signals.

After receiving a light signal, rock your wings to acknowledge if in the air, or, if on the ground, move your ailerons. At night, flashing your navigation lights will work, too.

The different Light Gun Signals are not that difficult to remember, but it’s always advisable to have a reference chart handy.

Many sectional charts or kneeboards have the Light Gun Signal chart listed on them, in case you forget.

The different Light Gun Signals are:

Each signal will be explained below, along with scenarios in which you would rely on Light Gun Signals from the tower.

What does Steady Green mean?

In the air, a steady green signal indicates that you are cleared to land.

This is normally given while in the traffic pattern, and even though you’re cleared to land, always be alert for other aircraft in the pattern that may not be aware of your presence.

On the ground, a steady green signal indicates that you are cleared for takeoff.

Take off as normal and proceed on course, maintaining awareness of other planes in the airspace.

What does Flashing Green mean?

If in the air, a flashing green signal tells you to return for landing.

You most likely would receive this signal while outside of the airspace/traffic pattern.

Upon receiving this signal, follow the direction and flow of the other traffic and enter the traffic pattern.

Be aware this does NOT give you permission to land.

On the ground, a flashing green signal tells you that you are cleared for taxi.

This would apply where the tower was made aware in advance that you did not have communications, and were on the ramp.

It could also apply after landing with a radio failure, and you need to taxi to parking.

What does Steady Red mean?

In fight, a steady red signal tells you to give way and continue circling.

Having other planes in the pattern, or ready to depart, would usually be the cause of receiving this light.

Do as instructed and keep circling in the direction of the other traffic, maintaining visual with the tower for other light gun signals.

On the ground, a steady red signal tells you to stop immediately.

There could be other planes landing or taxiing at the same time as you, so while taxiing, be sure to keep an eye out for traffic as well as signals from the tower.

What does Flashing Red mean?

In the air, a flashing red signal indicates that the airport is unsafe, and to not land.

This is the aviation equivalent of stop sign, and you’ll have to find another airport to land at.

On the ground, a flashing red signal tells you to taxi clear of the runway in use.

If you’ve landed sans radio, and another plane is coming in behind you, the tower will give you this signal.

Once received, make a hasty exit on the closest taxiway away from the runway, and await further light signals from the tower.

What does Flashing White mean?

A flashing white signal is not used for airplanes in flight. On the ground, it tells you to return to the starting point on the airport.

So, upon receiving this signal, be sure to taxi back to the ramp, maintaining awareness of other taxiing airplanes and light signals from the tower.

What does Alternating Red and Green mean?

For both the air and the ground, an alternating red and green signal means to exercise extreme caution.

There may be another plane in the pattern without a radio, animals could be on the runway, or the zombie apocalypse could have started.

You could either wait out the danger (on the ground or the air), or if in the pattern, you could leave the airspace for another airport.

This is one of those ambiguous signals that requires your best judgement.

Just because your radio failed doesn’t mean you’re stuck on the ground, or doomed to land at some Podunk grass strip in the middle of nowhere.

By using your best judgement and following the control tower’s Light Gun Signals, you can still complete your mission safely.

The first is steady green, which indicates clearance for takeoff, if on the ground, and landing, if in the air.

A flashing green signal on the ground tells you that you’re cleared to taxi, or to return for landing, if in the pattern.

A steady red signal is just like a stop sign. On the ground, stop immediately, and in the air, give way to traffic and continue to circle.

A flashing white signal is only used on the ground, and tells the pilot to return to the starting point on the airport, normally the ramp.

An alternating red and green signal indicates danger, and tells the pilot to exercise extreme caution. Beware of other planes in the pattern, or zombies on the active runway.

Knowing all of the Light Gun Signals is another tool in the pilot’s arsenal, offering safety and flexibility in the face of mechanical failure. 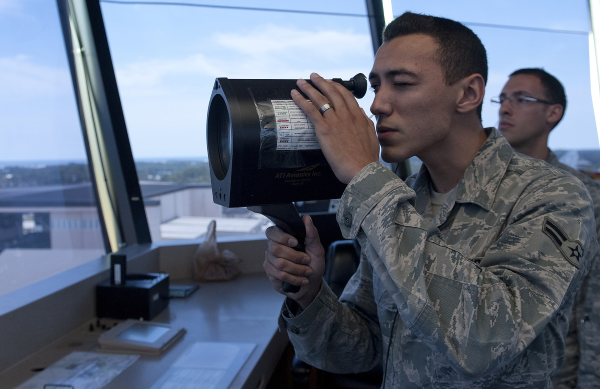 Learn more about control tower light gun signals, including what they mean both in the air and on the ground, and more.