Every pilot would love it if Mother Nature cooperated every time they entered the cockpit and gave us clear skies and tailwinds for every flight.

Unfortunately, Mother Nature can be moody and vindictive, and occasionally seems to bring the clouds down, just to spite us.

Sometimes, we’d like to fly, but the weather is below VFR minimums, which is a 1000’ ceiling with 3 statute mile visibility.

Weather reports at your destination indicate good visibility and cloud clearance, though.  Are you able to make the flight?

The answer is yes, with a Special Visual Flight Rule (SVFR) clearance, as long as certain rules, and common sense, are followed.

While the FAA has set minimum visibility and ceiling requirements for flying, they are not necessarily set in stone.

VFR minimums require at least 3SM visibility, as well as could clearance requirements which vary by airspace.

Generally, most airspace requires aircraft flying under VFR conditions to remain 500’ below clouds.

However, many times, the ceiling is only at, or a couple hundred feet above pattern altitude, making the cloud clearance requirement unmeetable.

Special VFR was conceived to address certain situations where weather is below VFR minimums, but flights can still be conducted safely.

For Special VFR, the minimums are essentially the same as Class G weather minimums, those being at least 1 statue mile visibility and clear of clouds.

This gives pilots more flexibility, and allows them to fly lower than normally allowed, also known as “Scud running.”

These areas extend from the upward extension of the lateral boundaries of the controlled airspace to the surface for an airport.

Special VFR only applies to operations below 10,000ft MSL.

This type of clearance can be requested at night, but only if the aircraft and pilot are both rated to operate under Instrument Flight Rules (IFR).

2. Why would I want to ask for a Special VFR Clearance?

Let’s say you’re on the way to the airport for a pleasure flight. Checking the weather, it is cloudy with somewhat limited visibility, but is still within VFR minimums, 1000’ ceiling with 3SM visibility.

However, by the time you arrive at the airport, the green and white beacon is spinning, indicating that the airport is now below VFR minimums.

According to radar, the cloud bank ends after a few tens of miles, and your destination airport is clear, with an unlimited ceiling.

Requesting a Special VFR clearance will allow you depart the below-minimums airport as long as you have at least 1SM visibility and are clear of clouds.

Always be sure that the weather is better before you take off under a Special VFR clearance, though.

You don’t want to fly into even worse weather and have to declare an emergency, or worse case, make an off-airport landing.

3. How do I request a Special VFR Clearance?

One caveat to this type of clearance is that Air Traffic Control cannot freely give it. It must be specifically requested by the pilot.

If the airport has an operating control tower, Special VFR can be requested through them.

If the airport is non-towered, calling up the local Flight Service Station (FSS) will allow the pilot to request this type of clearance.

Often times, the control tower will hint at it, by asking, “Is there anything special we can do for you today?”

Below is an example of the phraseology used during a Special VFR request:

4. Can I request this type of clearance at night?

Yes, a pilot can request Special VFR clearance at night.

Although it is possible to request this type of clearance at night, it is generally unadvisable.

This is because the darkness makes it almost impossible to see where the clouds are, and could lead to a dangerous situation.

It is therefore advisable to instead file an IFR flight plan instead of request the Special FVR clearance.

5. Can I request a Special VFR clearance in Class Bravo airspace?

Yes, but there are certain Class Bravo airports that do not allow this type of clearance under any circumstances.

A pilot can find the list of airports that prohibit Special VFR operations in 14 CFR, Part 91, Appendix D.

6. Can a student pilot request this type of clearance?

Yes, student pilots may request and fly under Special VFR, but only during the daytime.

This is because student pilots are not yet instrument rated, and an IFR rating and an IFR equipped aircraft is required for this type of clearance at night.

7. What’s the difference between Marginal VFR and Special VFR?

Marginal VFR isn’t a clearance, it is an indication on a weather chart that depicts ceilings of 1,000ft to 3,000ft and visibility between 3 and 5SM and VFR operations can take place.

Marginal VFR indications are intended to alert pilots to weather conditions that could be changing into Instrument Meteorological Conditions (IMC), requiring an IFR clearance to enter.

There are no special rules or requirements to fly in Marginal VFR conditions, as by definition, the weather is above minimums.

Receiving a Special VFR clearance can give a pilot more flexibility in getting where they need to go if the weather is bad.

Requesting this type of clearance can be done via the control tower, of the local Flight Service Station.

Special VFR clearance must be specifically requested by the pilot, however. The tower/FSS cannot freely offer it.

From sunrise to sunset, this type of clearance can be requested as long as visibility remains above 1SM and the pilot remains clear of clouds.

It can be requested at night, but the pilot must be instrument rated, and the aircraft must be equipped for instrument flight rules.

Special VFR clearance is another tool in a pilot’s arsenal, but it is still a pilot’s responsibility to ensure a safe flight.

Every pilot should consider their own personal minimums and, even if this type of clearance is available, sometimes it’s safest to just stay home and fly another day. 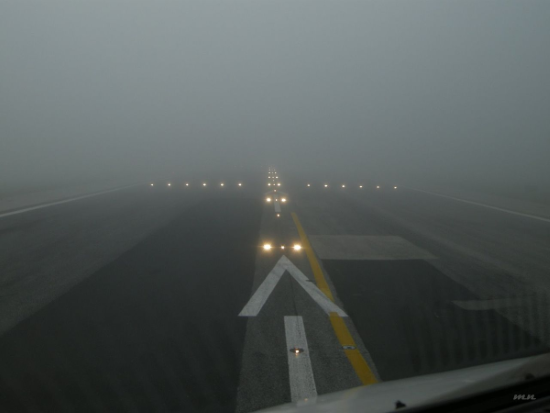 A Special VFR clearance can help a private pilot get out of a sticky weather situation, legally. Learn more about this type of clearance here.