Fixed Pitch propellers are fine and dandy for most low performance bug-smashers, but as power and performance increases, there needs to be a better way to get that power into the air.

As power increases, a fixed-pitch propeller either needs to increase in size, or a different propeller with a steeper pitch must be installed.

It is a fine balance between power and performance, and beyond a certain point, fixed-pitch propellers are no longer adequate.

In this article, we will be mainly discussing Constant Speed Propellers, and contrasting them with Variable Pitch Propellers.

1. What is a Constant Speed Propeller?

A Constant Speed propeller is a common type of adjustable pitch propeller in which the pitch of the blades is constantly adjusted by a governor to keep a steady RPM speed.

Even if the load on the engine varies, the governor ensures that the RPMs stay the same.

Airplanes with a Constant Speed propeller have two controls, the throttle and the propeller control.

Once set and in cruise, a decrease in propeller load or an increase in airspeed will cause the blade angle to increase, making the blades “bite” more air, slowing down rotation.

An increase in propeller load or a decrease in airspeed will cause the blade angle to decrease, taking smaller “bites” of air, and increasing propeller speed.

The propeller’s constant speed range is defined by the propeller control, and the high and low stops of the control lever.

If the propeller control is operated between the pitch stops, constant propeller RPM will be maintained.

Constant Speed propeller equipped airplanes have manifold pressure gauges which indicates the power output of the engine and is controlled by the throttle.

The manifold pressure gauge measures the Manifold Absolute Pressure, or the absolute pressure of the fuel/air charge inside the intake manifold.

The operating range of the engine is indicated on the manifold pressure gauge by a green arc, with a red line indicating maximum pressure.

Operating beyond this limit can put stress on the engine cylinders and lead to a catastrophic engine failure.

When both RPM and manifold pressure need to be adjusted, it is essential do modify their settings in the correct order.

If the power needs to be decreased, reduce manifold pressure before reducing the RPM.

If the power needs to be increased, the opposite order must be followed, increase RPM and then manifold pressure.

The governor is operated hydraulically by engine oil pressure, which is directed through a hollow crankshaft and into the propeller.

The oil pushes on a piston, which is connected a lever, and then the propeller blades, adjusting the pitch.

It is not recommended to run the engine at low RPM at high manifold pressure.

Doing so greatly increases stress on the engine, and could lead to a situation where detonation could occur, which results in engine damage.

2. What is the advantage of a Constant Speed Propeller?

The main advantage of a Constant Speed Propeller is that it converts a high percentage of engine horsepower into thrust over a wide range of RPM and airspeed combinations.

A Constant Speed Propeller is more efficient than Fixed Pitch Propellers because it allows for the engine to operate at the most efficient RPM for given conditions.

By operating the engine at the most efficient RPM, pilots can improve fuel efficiency, increasing range.

Operating an aircraft engine too fast or too slow can cause wear. A Constant Speed Propeller can help reduce engine wear.

A Constant Speed Propeller is just one variation of a Variable Pitch Propeller.

The first Variable Pitch Propeller equipped airplanes could only vary pitch on the ground. Pitch could not be modified in the air.

Modern airplanes with Variable Pitch Propellers can adjust them in flight, but they do not automatically adjust to maintain a constant RPM.

Some airplanes are equipped with electronically actuated pitch controls instead of a hydraulic governor.

Most electronic pitch control equipped aircraft are considered Variable Pitch, because the electronic actuation did not maintain steady RPM.

4. What are the Advantages of a Variable Pitch Propeller?

Some airplanes, like early Beechcraft Bonanzas, had two electronic pitch settings, one for climb and one for cruise, manually selectable by the pilot.

Electronic pitch control is advantageous in case the engine stops. A lack of oil pressure precludes feathering the prop (if possible), while electronic pitch blades can still operate.

During the pre-flight, it is essential to check the propeller of a Constant Speed Propeller equipped airplane.

If there is any damage, nicks, or any oil leaks under the propeller, consider the airplane non-flyable and have the issues looked at by a certified A&P mechanic.

If the pre-flight goes well, the run up consists of cycling the propeller from full fine (small “bites”) to full coarse (large “bites).

It is recommended to do at least 3 of these cycles, as the engine oil inside the propeller could be cool and needs to be flushed out.

Even though Constant Speed Propellers are more complicated, they enable high power airplanes to maximize performance and efficiency.

Operating at the most efficient RPM and power output can maximize fuel efficiency and increase range.

They use engine oil, channeled through the crankshaft, to push on a piston inside the propeller, which is levered to adjust the pitch of the blade.

Constant Speed Propellers use the governor to set a speed, and the governor automatically adjusts blade pitch to maintain a constant RPM.

Engine power is managed using the manifold pressure gauge, which is an indication if the fuel/air charge inside the intake manifold.

Care is needed during operation, as operating the engine at low RPM and high manifold pressures can result in engine damage.

Variable Speed Propellers are less versatile, but simpler to operate, generally only having a few different settings. 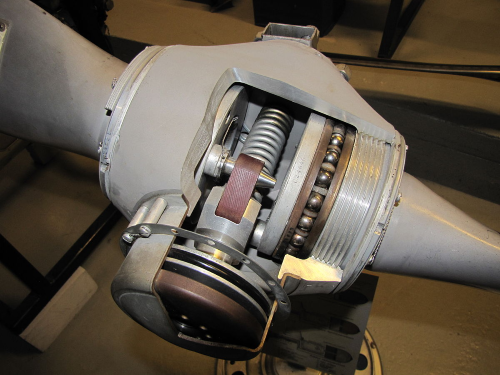 A Constant Speed Propeller is an adjustable pitch propeller in which the pitch of the blades is constantly adjusted by a governor to keep a steady RPM speed.