In March of 1915, the Turks started to prepare for an invading force from the Western Allies in the Dardanelles sector of the Ottoman Empire.

They created an army group specifically tasked with repelling the expected Allied forces.

The Turkish 5th Army was formed on March 25th, 1915, and it was led by Field General der Kavalleri Otto Limon von Sanders, who headed Germany’s military mission in Turkey.

The town of Gallipoli held the field headquarters for the 5th Army, who did not have any air power until the middle of July 1915.

Due to the Turkish leadership’s disregard for military aviation power, it reached them slowly.

The war officially moved to land at the Dardanelles Straits on April 25th, 1915, when the Gallipoli Peninsula saw the arrival of British and French forces.

During that time, the 5th army only had three Albatross B.I. and one Rumpler B.I aircraft.

The use of the Albatross B.I as a reconnaissance aircraft began in late 1913, and it was one of the first to have the pilot and observer side-by-side.

The purpose of having the two in a tandem configuration was so that the observer could see the same things as the pilot.

The Albatross B.I. had a Mercedes DI engine that was able to produce up to 100hp, but the top speed of the aircraft was only 60mph.

The estimated B.I climb rate was at 200’ per minute, the maximum take-off weight was 1,800 lbs, and its operational range was 400 miles.

The Rumpler B.I was one of Germany’s first “battleship planes,” and it was used by the Ottomans over Gallipoli.

The wingspan of the Rumpler B.I. covered an area of 42’ 6’’, and it was equipped with a Mercedes DI-Krei engine that was able to produce 104hp allowing it to reach 75-79 mph.

The crew of the aircraft had a pilot who was in the rear of the main fuselage with the observer behind the main propeller mechanism.

The Rumpler began flying on the field in the summer of 1914, and it was provided by Germany to help Turkish defense.

On the morning of March 18th, the Ottomans had the first air mission of their campaign, and it was led by the only Rumpler held by the Turks.

It underwent a reconnaissance mission to track and monitor the movement of the Allies, and the pilots reported back that the Allies had a much larger force than expected.

Prior to the invasion from the Allies, they sent out scout planes to search for explosives in the Straits, a place full of sea mines.

The planes were eventually called back due to heavy seas, but they believed the area was clear of mines.

This mistake would end up costing high numbers of casualties with the sinking of the Irresistible, Bouvet, and Ocean.

The Ottomans used the Rumpler to launch scout missions over the straights.

The first one found that the Allied armada was retreating from that area, but Turkish aircraft was grounded the next four days due to the weather.

Action resumed on the 22nd when a Royal Navy Scout plane crash landed after being hit by a Turkish artillery shell.

The Ottomans performed another patrol mission on the 26th, and they received two more B.I Albatross planes from the German government.

The Turk’s limited air power was crucial in providing reconnaissance, and they used it to keep track of the Allied armada.

The French and British used their air power to launch offensives, and the French had a squadron, including eight Farman HF.20 aircraft, stationed at Bozcaada.

The HF.20 was designed by Henri Farman, and it was a simple but under-powered aircraft.

The HF.20 had a Gnome 7A 7 cylinder, and its rotary engine was able to generate 80hp, allowing the aircraft to reach speeds up to 65mph.

The plane could not keep up with the speed of the new German pursuit planes, but it was able to stay in the air for 3hrs and 20mins, which was important for recon missions.

The aircraft was equipped with a 0.30in machine gun for defense.

While the Turks often suspended air missions due to the bad weather, the Allies were willing to fly under most conditions, and they allowed the planes to go longer distances.

The Allies also adopted new technology quicker, which allowed them to hold an advantage in the air.

The Sopwith Tabloid seaplane was the Allies’ main plane at the start of the expedition.

The aircraft was equipped with a single Gnome Monosoupape 9 cylinder rotary engine, which could produce up to 100hp.

It only had enough space for one individual, and the fully-loaded weight was 1,580lbs.

In late June, the situation of the battle was changing on the ground and the air after the Turks successfully defended against an Allied invasion.

The Germans sent the Turks two samples of the Gotha Airplane on July 5th.

The aircraft, which were sent to Canakkale Fortress Command, brought excitement to the Turks and fear to the British and French.

The Gotha was one of the best aircraft ever developed.

The allies knew they were in trouble on the peninsula by August 10th, and they could not keep fighting on the Conkbayiri line.

On the Anafartalar front, the allies had a failed attack on the morning of August 13th.

The final battle for Anafartalar commenced on the 17th, and the Ottomans held strong despite the allied bombardment of Turkish defense positions.

The French and British high commands abandoned the campaign a month later, and they began to retreat while defending against the increasingly sized Ottoman air force.

The allies eventually evacuated the peninsula in January 1916, and the Dardanelles sector air defense was assigned to the new Dardanelles Squadron. 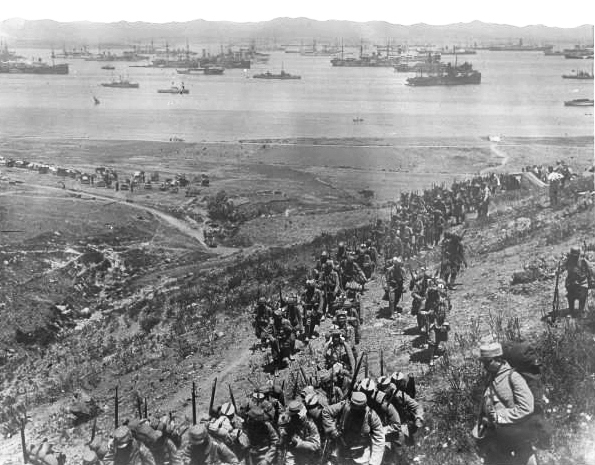 Learn more about the air campaign in the Dardanelles.