On a clear day, one can see for miles in any direction, but what you can’t see are the invisible lines that crisscross the country.

These lines are the imaginary ones that are depicted on the sectional chart.

They separate areas in which a pilot can fly, and have different rules based on the type of airspace they depict.

There are several classes of airspace as was discussed in a previous article, but there are also other areas on a sectional chart that require more scrutiny.

These are Special Use airspace, which is airspace that has special rules to fly in, if allowed.

There are 8 main types of Special Use Airspace, which is discussed in more detail below.

8 Types of Special Use Airspace

Not all airspace is free to enter, some have extra rules to be aware of, if a pilot is even allowed to enter.

It is always a pilot’s responsibility to know the rules of the airspace they are flying in, and therefore knowing all of the types of Special Use Airspace is required.

The 8 types of special airspace are:

Restricted Airspace is a bit less restrictive than Prohibited Airspace, but is very highly controlled.

Within this airspace, hazards may exist, like military flights and weapons testing, or may be to protect sensitive areas, such as Area 51.

VFR flight is almost always prohibited, although in rare occasions it may be possible to call ahead to the controlling agency for permission.

The only way one can fly through there is via an IFR flight plan, and only if approved.

Restricted Airspace is depicted on section charts by a blue border with blue tic-marks.

They are charted with an R followed by a number (e.g. R4401), and detailed information about the restricted area is on the back of the associated sectional chart.

Prohibited Airspace are areas in which all flight is prohibited without exception, and surrounds areas of national security importance, like the National Mall and Camp David.

It is normally depicted on the sectional chart by a circular blue border and is noted with a P followed by a number, (e.g. P-49).

Flying into Prohibited Airspace may result in interception or getting an unpleasant visit by dark suited types of people.

MOA’s are areas in which military operations may be being conducted.

Its purpose is to separate out IFR traffic from the military traffic while active.

If ATC is unable to provide separation in an active MOA, they will reroute the traffic around the area.

VFR flight is allowed within an MOA, and ATC contact is not even mandatory, but it is not advisable to fly VFR within an active MOA and extreme caution is required.

MOA information, such as altitudes, operating times, and contact frequencies, can be found on the associated sectional charts.

If the MOA is not active, VFR flights can usually be conducted as normal.

Warning Areas are similar to restricted areas, but the US doesn’t have sole jurisdiction of the airspace.

These areas may contain operations that are hazardous to nonparticipating aircraft.

They are typically located along the coasts and extend out 12NM.

The areas are depicted with W’s and an associated number (e.g. W-237B) and have a blue border like restricted areas.

Alert Areas let pilots know of areas where a high volume of flight training or other operations are being conducted.

They are depicted on the chart with a blue border and are noted with an A and an associated number (e.g. A-211).

Pilots may operate within Alert Areas, but must maintain caution, and both the pilot and all other participating aircraft are responsible for maintaining separation to avoid collisions.

TFRs are areas that are restricted for certain periods of time.

The areas are generally circular, with a certain NM radius (depending on the type of restriction) around the sensitive activity.

Activities that invoke Temporary Flight Restrictions are sports games, where the TFR extends around the stadium, and visits by the President or other important political figures.

It is a pilot’s responsibility to check for TFRs before a flight, as this is the most common way restricted airspace is entered.

TFRs can be looked up online via the FAA website, or a call to a Flight Service Station can also suffice.

Because they are temporary, they will not show up on a sectional chart, although several online sources depict TFRs.

Use these third-party resources with caution, as they may not be accurate.

Penalties for unauthorized entry into a TFR can vary based on activity.

The later is also another instance where a pilot can be intercepted by the Air Force and get an up-close view of our tax dollars at work.

These are areas that are sensitive and/or with increased security needs.

Although there may be temporary flight restrictions over NSAs, pilots may fly over them freely, and the altitude restriction is merely a guideline.

These areas are depicted on the sectional chart as thick, dashed magenta lines with the requested altitude published next to the area.

While a test is ongoing, spotters, either visually or with radar, keep a lookout for overflying aircraft.

If an aircraft is spotted nearing the Controlled Firing Area, operations are suspended until the aircraft clears the area, at which time the operations resume.

Because it is on the ground personnel to suspend operations, a change in flight path by the pilot is not required.

Can you fly through Warning Areas?

It is possible, but not advisable.

If a pilot really wishes to fly through a Warning Area, they must make sure that the area is cold before entering.

Because each Warning Area is uniquely numbered, it is easy to look up the corresponding information.

The information for the Warning Areas on the sectional chart depicts the altitudes of the area, the typical operating times, and contact information.

Contacting the controlling authority prior to entry can give you permission to fly through the Warning Area.

Always keep in mind, though, the risks involved, and determine if it is better to use a different route instead.

Which type of Special Use Airspace is not depicted on charts?

Controlled Firing Areas (CFAs) are not depicted on sectional charts.

Because operations stop when a plane approaches, pilots do not need to worry about avoiding the CFAs.

What is the difference between Restricted and Prohibited Airspace?

Restricted Airspace can be flown into under certain circumstances, and generally, if flying under an IFR flight plan, are regularly entered if there are no hazards.

Can you fly through a TFR?

Each TFR is different, and therefore have different rules depending on the type.

The FAA publishes procedures for every TFR, and if operations are allowed within a TFR, they typically involve two-way radio contact with ATC and a discreet transponder code.

Most other instances of flying within/through a TFR involve flying on an active IFR flight plan.

Because each TFR is different, it is the pilot’s responsibility to keep track of the requirements.

If there are any questions or confusion, contacting ATC will usually yield answers.

Can you fly through Restricted Airspace?

Under VFR flight rules, the answer is generally no unless it is specifically authorized by the controlling agency, which is rarely granted.

If under an IFR flight plan, however, flight through a Restricted Area is allowed without any other clearance being required.

There may be some altitude and boundary restrictions, but ATC will route the pilot accordingly.

There are 8 main types of Special Use Airspace, each of which has different rules and operating procedures.

Restricted Airspace has strict rules for entry, but still allows for flights within it if on an IFR flight plan.

Prohibited Airspace restricts any and all types of flight operations, and typically centers around areas of national security importance.

While flight is allowed within MOAs, extreme caution is required when the MOAs are active.

Warning Areas are typically located along the coasts, and can be dangerous to aircraft.

It is possible to fly through Warning Areas if permission is received, but this is generally not advisable.

Alert Areas are areas of intense training or other operations, and require vigilance from everyone operating inside.

National Security Areas surround sensitive sites, and are generally advisory in nature, as pilots are requested to maintain the depicted separation.

Controlled Firing Areas are not depicted on sectional charts, as operations cease when an aircraft comes near.

Knowing the different types of Special Use Airspace is essential for pilots, as it helps keep them safe and out of trouble.

FAA Map of all Special Use Airspace in the US

FAA Map of all TFR’s in the US 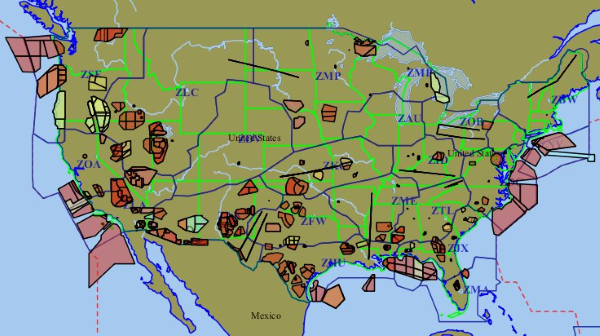