If you want to take off in an airplane, you don’t want to scrape along on your belly while on the ground.

You also want to land without bending your prop and hopefully want to use the airplane again.

To facilitate movement on the ground, airplanes are fitted with a variety of landing gear depending on the type of aircraft and their operating environment.

In this article we will be discussing several different types of landing gear. Keep reading to know more!

The 4 Basic Types of Landing Gear

There are many different designs and layouts for landing gear, but in this article we will stick to the common types that appear on General Aviation aircraft.

In general, there are 4 basic categories of landing gear:

This is the most common type of landing gear in use today, and consists of two main wheels under the fuselage and a third wheel at the nose of the airplane.

While a bit heavier than conventional landing gear, it aids ground handling by increasing forward visibility and makes it much harder for the plane to nose over.

In most designs, the nose gear is attached to the rudder pedals and pivots in yaw, allowing for easy steering.

It also makes landings easier and more stable, nearly eliminating the chance of a ground loop, which is a fairly common issue with tail-wheel gear planes.

Tricycle Gear are usually fixed, with fairings over each wheel to aid in aerodynamics and increase speed.

However, high performance designs use retractable landing gear, which retracts the main wheels either into the fuselage or the wings, and retracts the nose wheel into the front fairing.

This eliminates a large source of drag (the gear itself), and while allowing for increased speeds, it also increases weight and complexity.

Tricycle Gear aircraft aren’t as versatile as they would seem, however, and that is why there are still different category of gear in use.

Tail-Wheel Gear aircraft use two large wheels located forward on the fuselage, and a single, small wheel located at the tail.

This was the layout used by most planes from the 1920’s to the 1950’s as it was simpler to design and implement.

Steering was normally accomplished using differential braking, in which applying the brake on one side allowed the plane to pivot on that point, turning the plane.

Some designs had a steerable tail wheel that moved with the rudder, also allowing steering.

Due to the nose-high attitude of a tail-wheel gear plane on the ground, it made it hard to see during ground movement.

This type of gear also has disadvantages during take-off and landing, such as nosing over if too much brake is applied.

During landing, if the pilot doesn’t touch both main wheels down at the same time, the plane could tilt over and dig a wing into the ground during rollout, resulting in a ground loop.

Despite these disadvantages, Tail-Wheel Gear airplanes still have advantages during bush plane operations from grass and other unpaved runways.

Very large tires can be fitted on Tail-Wheel Gear aircraft, allowing it to land on very rough terrain safely.

They are also better suited for soft field operations, as they don’t have a nose wheel that can sink and dig into the ground suddenly.

While harder to operate during taxi and landing, Tail-Wheel Gear aircraft will continue to operate in rugged environments for the foreseeable future.

Pontoons are large, hollow tanks that are attached to an airplane in place of the regular landing gear and allow for operations on water.

Using a single Pontoon allows for operations in rougher waters, but is bulkier.

Twin float Pontoon Gear use two Pontoons in place of the main gear.

The lack of stabilizing floats on the wings make twin float Pontoon aircraft easier to moor, but they can only operate from smooth water.

Many Pontoon equipped floatplanes also have retractable landing gear inside the Pontoons, allowing for landing on paved runways as well.

While this increases versatility, it also increases weight and complexity.

Many planes in Arctic environments utilize skis in place of their regular landing gear.

These are skis just like skis used by sportsmen as they descend down a mountain and glide over the snow.

Some designs utilize ski-only gear, in which the wheels are replaced by skis.

These are mostly used during the winter when there is deep, freshly fallen snow.

Other designs are add-ons that attach to the wheels and are made to be used on shallow or densely packed snow.

The other advantage to the ski add-ons is that the plane is still able to land on paved runways, while the ski-only gear plane has to stick to snow.

The first powered plane ever, the Wright Flyer, took off from a track and used skis to land.

Some gliders also use skis to land, and the first rocket powered airplane, the Messerschmitt ME163, took off using a disposable dolly, but landed using a single retractable ski.

While a very narrow niche, ski-planes still have their use in rugged Arctic environments and their use will continue.

Airplanes are meant to operate in the sky, but they still need to get around on the ground, hence the invention of the Landing Gear.

There are 4 basic categories of Landing Gear that General Aviation planes use: Tricycle, Tail-Wheel (Conventional), Pontoons, and Skis.

Tricycle Gear planes are by far the most common, as they are only marginally heavier than the older Tail-Wheel design but have several advantages.

The Tricycle Gear gives better ground visibility while taxiing, as well as has better stability while landing.

Tail-Wheel Gear is mostly used on older, classic designs, but is also in use by bush pilots for back-country flying.

Tail-Wheel aircraft can use much larger tires than Tricycle Gear designs, allowing it to take off and land in rugged environments.

Pontoons are used by planes that want to land on water, as they allow flotation.

Most modern floatplanes use twin-float Pontoons, which limits operations to when the water is calm, but also makes mooring easier.

Twin-float Pontoons also make it easier to integrate wheels inside the Pontoons, allowing the plane to also land on paved runways at the expense of extra weight and complexity.

Ski-Planes use fixed or add-on skis as landing gear, allowing it to operate in snowy, Arctic environments.

In general, it is the Types of Landing Gear that determines the operating environment of an airplane, and having different categories allows for more versatility. 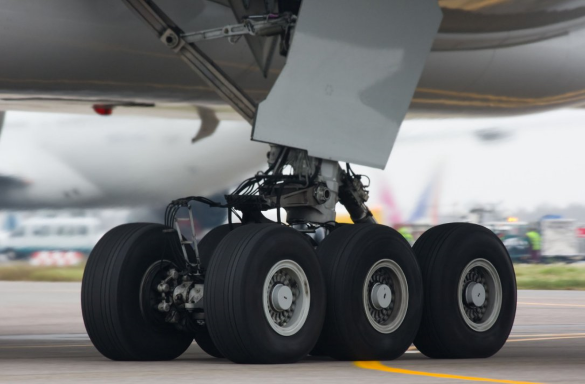 There are 4 different conventional types of landing gear, all of which we'll discuss in this article. They include tricycle, tail-wheel, pontoons, and skis, learn more here.