RVR stands for Runway Visual Range and is the most accurate observation method used in determining how far a pilot will be able to see horizontally down the runway.

Why Does Visibility Matter So Much?

Pilots need to know what the visibility is at an airport for a variety of reasons.

Visual pilots need to know that the visibility will be good enough to legally fly into an airport under VFR and also stay within their personal minimums.

IFR pilots are concerned about whether or not they will actually be able to see the runway during an instrument approach or if they need to plan on going missed and flying to an alternate.

The “units of distance” is typically reported in statute miles. One of the only times you’ll reference statue miles in aviation rather than nautical miles!

The visibility can also be reported in smaller units such as feet. Some international airports may also use meters.

It’s worth noting the visibility definition can be even more specific depending on the context.

The Different Types Of Visibility

The pilot controller glossary provides several different definitions under visibility but using the ICAO definitions we can gather:

What Definition Matters To Me?

The Aeronautical Chart User’s Guide published by the FAA specifies landing minimums on an approach plate as “The section that gives the pilot the lowest altitude and visibility requirements for the approach.”

Although they do not clarify their use of the word visibility it is obvious that they mean flight visibility.

After all, the pilot is not a certified observer on the ground. The pilot is in an aircraft looking forward.

When the pilot is on an approach he/she will need to have at least a specific amount of visibility forward from the cockpit of an aircraft in flight to identify the runway and make a landing.

Both RVR and ground visibility are types of ground observations.

They differentiate in how the values are actually obtained.

Ground visibility is the prevailing horizontal visibility near the Earth’s surface as reported by the United States National Weather Surface or an accredited observer.

Ground visibility can be obtained either manually or through automated means.

Sometimes ground visibility is reported by an automated weather station such as an ASOS or AWOS.

This is the least accurate visibility value.

You will know if your airport relies on automated observations because the word “AUTO” will appear at the front of the METAR if you are reading the weather.

If the word AUTO is absent it means that the readings obtained by the visibility sensing equipment is being augmented by a certified weather observer.

A certified weather observer is a person who is physically present at the airport and has been trained in meteorology and passed a certifying exam.

As someone who has worked as a certified weather observer, I can personally say that the exam was not easy!

When I worked as a weather observer every hour the ASOS would alarm me 5 minutes prior to publishing the METAR for the next hour.

I would then compare what the computer was indicating for visibility compared to what I was seeing with my own eyes.

I had the advantage of being able to look at multiple areas of the airport and had predetermined landmarks aiding me in identifying how far I could see.

I would determine the greatest horizontal visibility equaled or exceeded throughout at least half the horizon circle (not necessarily continuously) and that would be the prevailing visibility.

If the transmissometer (which senses visibility) was wrong I would override it and publish the actual prevailing visibility.

Although augmented weather observations are better than automated ones they are still not good enough for operations in extremely poor weather conditions.

That is where we need Runway Visual Range information.

RVR is the best way a pilot can know exactly what the visibility is going to be directly over the runway.

It is used primarily for operations in very low visibility so you will often see RVR equipment at large airports with lots of airline or jet traffic.

Smaller airports will typically not be set up to provide RVR readings.

A list of the airports that have RVR can be found here: https://rvr.data.faa.gov/cgi-bin/rvr-airports.pl

How Does RVR Work?

RVR values are measured by multiple transmissometers mounted on 14-foot towers along the runway.

The transmissometer projector and receiver are mounted on towers 250 feet apart. A known intensity of light is emitted from the projector and measured by the receiver.

Most people can imagine this concept because it is the same way garage door sensors work.

In the case of RVR the light signal may be obscured by matter such as rain, snow, dust, fog, haze or smoke.

The intensity of the light is measured by the receiver and converted to an RVR value by the signal data converter.

An RVR transmissometer established on a 250-foot baseline provides digital readouts to a minimum of 600 feet. These setups are currently being phased out.

The new systems have low maintenance costs, eliminate the use of steel and concrete structures on the airport surface, and provide RVR readings as low as 0 feet.

Ten-minute maximum and minimum RVR values for the designated RVR runway are reported in the body of an aviation weather report when the prevailing visibility is less than 1 mile or the RVR is 6,000 feet or less.

How Can You Read RVR In A METAR?

Runway visual range is coded in the following format: the initial R is code for runway and is followed by a runway number. When more than one runway is defined with the same runway number a directional letter is coded on the end of the runway number.

Next is a solidus / followed by the RVR in feet (noted by FT).

For use as an example, taken from the FAA Advisory Circular 00-45F (Aviation Weather Services) the RVR value for Runway 01L of 800 feet would be coded as R01L/0800FT.

When the RVR varies by more than one reportable value, the lowest and highest values will be shown with V between them indicating the variable conditions.

If RVR is lower than its lowest reportable value, the visual range group is preceded by an M. For example, an RVR for runway 01L of less than 600 feet is coded R01L/M0600FT.

If RVR is greater than its highest reportable value, the visual range group is preceded by a P. For example R01L/P6000FT

If RVR is missing and would normally be reported RVRNO is reported in the remarks section.

Air traffic control will also be able to provide a pilot with RVR divided into thirds of the runway so that a pilot will be able to know what to expect at touchdown, mid runway, and rollout.

Runway visual range is a very useful tool that pilots can use at airports with the proper equipment.

It provides them with the most accurate ground observation as to what they will see horizontally down the runway.

If you know exactly what the ground visibility is you can have a reasonable expectation that the flight visibility will not be much different.

With that information, you can decide if it’s worth attempting an approach or going directly to an alternate.

It can also help you decide if the visibility is good enough for a safe departure or if it’s time to make a cup of coffee and wait for the weather to improve.

Pilot/Controller Glossary of the FAR AIM 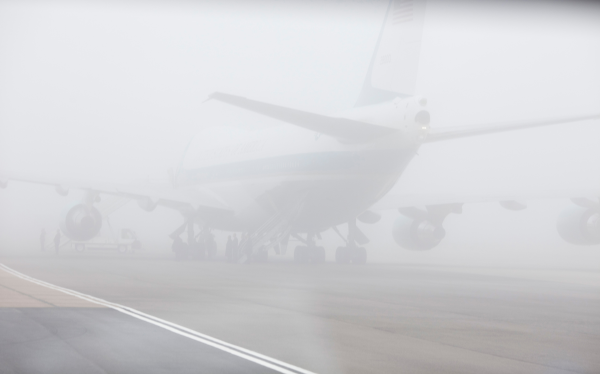 Runway Visual Range, or RVR, is used to determine how far a pilot will be able to see horizontally down the runway. Learn more about RVR and how it's calculated here.