Developed in the 1990’s, Brazilian manufacturer Embraer developed the ERJ series of aircraft to fill a perceived new market for a plane that was faster and more comfortable than turboprops of the time.

ERJ stands for Embraer Regional Jet, and the ERJ 135 is a popular choice for small regional carriers that specialize in short-haul routes.

Keep reading for 10 things you didn’t know about the Embraer ERJ 135!

The first of the ERJ family to be released was the ERJ 145, the largest of the family with 50 passenger seats, and was first flown commercially in 1997.

The fuselage was shortened to accommodate different markets and missions, resulting in the ERJ 140 and ERJ 135.

9. It was Developed from the ERJ 120 Brasilia

The ERJ 120 Brasilia was a twin-engine turboprop aircraft developed by Embraer and first flown in 1985.

The ERJ family of aircraft were derived from the Brasilia, with Embraer stretching the fuselage and eventually moving the engines to the rear.

The ERJ family shares about 75% of its parts with the Brasilia, which helped lower development costs.

8. It uses a Compact Seating Arrangement

Due to the small size of the ERJ 135, it features an unusual three-abreast seating arrangement.

A pair of seats are on the right side of the aircraft, with only a single seat on the left side.

The aisle is offset to accommodate the seating arrangement, and the storage compartments are located above the two seats on the right.

7. It Features a Pair of Rolls-Royce Engines

Each engine provides approximately 7,500lbs of thrust, and allows for low fuel consumption.

Because the emphasis was on low costs and fuel efficiency, the ERJ 135 does not fly as fast as other jets, with a maximum cruising speed of Mach 0.78.

6. It Shares a Type Rating

The only major difference between the planes in the ERJ family is the fuselage length, and all of the major systems and avionics are the same.

Due to the low acquisition price and comparatively low cost to operate, Embraer decided to turn the ERJ 135 into a business jet.

This resulted in the Embraer Legacy 600/650 series of aircraft, which carries 13 passengers and features extra fuel tanks, which increases the range over the ERJ 135.

4. It was Used by Militaries

At least 10 countries have used the military variant of the ERJ, the R-99.

It is often fitted with radar and used as an Airborne Early Warning and Control (AWACS) plane.

Other military variants are used for signals intelligence duties and maritime patrol.

3. It is a Very Safe Aircraft

The Legacy 600 was severely damaged in the left wing and tail, but was able to land safely.

2. Production for the ERJ Family is Finished

First produced in 1992, the final plane in the ERJ family rolled off the assembly line in 2020.

Due to its reliability and low operating cost, the ERJ 135 and its stable mates are still in service with regional airlines all around the globe.

Although production is finished, the ERJ family will continue to be used for many years to come. 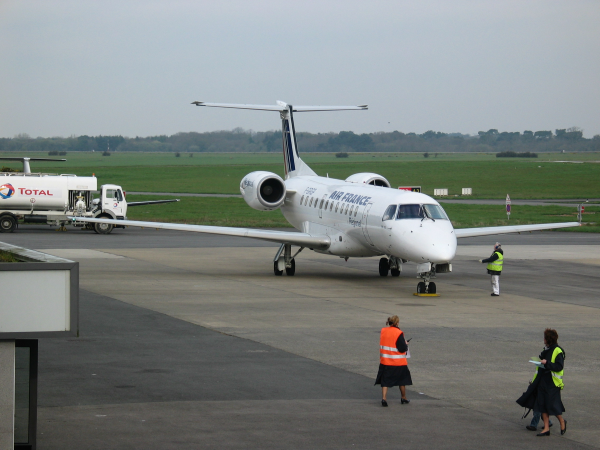 The Embraer ERJ 135 is a small sized jet that is commonly used by regional airlines, as well as large multi-national companies for business travel. Here are 10 fast facts about the ERJ-135.