The Grumman F7F Tigercat is a little-known US Navy fighter, but is a plane that has an interesting history.

Seeing service just after World War 2 ended, it became a victim of the rapid technological advancements becoming common at the time.

It holds several firsts for a Navy fighter, as well as boasts limited combat experience.

Keep reading to discover 10 facts you didn’t know about the F7F Tigercat!

10. The Tigercat Wasn’t its Original Name

During initial design, Grumman called the plane the “Tomcat.”

It was decided by puritanical big-wigs that the name was too sexually suggestive, so Grumman changed the name to “Tigercat.”

The “Tomcat” name was re-used during the 1970’s on another, much more well-known Navy aircraft, the F-14.

9. It was Extremely Well Armed

Grumman and the US Navy wanted to build a fast, well-armed “convoy fighter.”

To this end, the loaded it up with guns and cannon, featuring 4 20mm AN/M3 cannons in the wings and 4 M2 50 caliber machine guns in the nose, along with other bomb/torpedo hard points.

Later, some F7F variants ditched the nose mounted machine guns and replaced them with the AN/APS-19 radar to aid in night fighting.

8. It was Extremely Powerful

With 4,200 total horsepower, this made the F7F one of the fastest piston-engine fighters, being over 70mph faster than a F6F Hellcat.

7. It was the First Twin Engine Navy Plane

The Tigercat was the first US Navy aircraft to be purposely designed and built as a twin-engine plane.

It was also the US Navy’s first twin-engine plane to be accepted for use.

6. It was the US Navy’s First Plane with a Tricycle Gear

The F7F Tigercat was the first US Navy plane designed from the start with a tricycle landing gear arrangement.

5. It was too big for most Aircraft Carriers

Because of its size and weight, the Tigercat was designed for use on Midway-class aircraft carriers or larger.

Most of the existing US Navy carriers were too small to host the Tigercat.

4. Most F7F Tigercats were Ground Based

Although the Tigercat was designed for use on Midway-class aircraft carriers, its performance and weight made it unsuitable for carrier use.

This leads into our next fact…

3. Only 13 F7F Tigercats were Certified for Carrier Ops

The F7F-4N variant of the Tigercat featured two seats, a tailhook, and increased structural strength.

This night fighter variant was the only F7F Tigercat variant to be rated for operations.

Of the 364 Tigercats built, only 13 were of the F7F-4N variant and saw extremely limited carrier use.

2. It Only had Limited Combat Experience

It didn’t see action in World War 2, but was used during Korea as a night interdiction fighter.

They were the only F7F squadron to see combat, and only shot down two North Korean Po-2 Polikarpov biplanes during their deployment.

1. The F7F Tigercat Legacy Continued After the War

After leaving service, several Tigercats were bought as surplus and used as water bombers to fight wildfires.

The last water bomber F7F Tigercat was used by Sis-Q Flying Services in California until it was retired in the late 1980’s.

There are currently 8 airworthy F7F Tigercats, and several more on static display around the country. 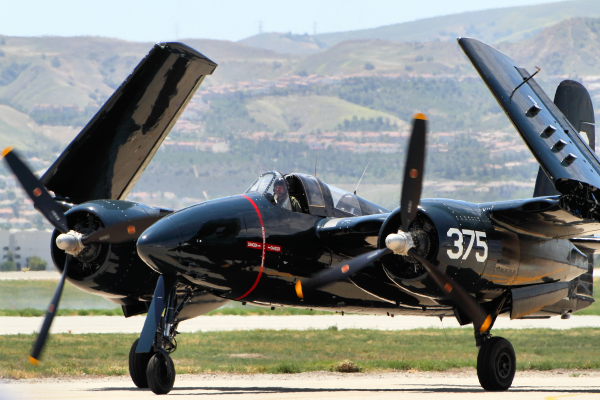 The Grumman F7F Tigercat was the first twin engine fighter aircraft that was employed by the US Navy. See 10 interesting facts about the F7F you probably didn't know.