The Consolidated B-32 Dominator has a checkered past and a short-lived operational life.

Developed in parallel with the much more famous and successful Boeing B-29 Superfortress, it failed to find a niche, and was phased out after a short operational period.

Despite its obscurity, the B-32 Dominator remains famous for a nefarious reason.

Read on for 10 things you probably didn’t know about the Consolidated B-32 Dominator!

10. It was Developed Concurrently with the Boeing B-29 Superfortress

Development for the B-29 started in 1938, but in 1940, the United States Army Air corps asked Consolidated for a similar design in case the B-29 was delayed.

The contract for the first XB-32 prototypes were signed on the same day as the contracts for the XB-29 prototypes, September 6th, 1940.

9. It was Developed from the B-24 Liberator

Consolidated also designed and built the famous B-24 Liberator, which served alongside the B-17 in Europe.

It featured a similar layout, with a high wing and four engines, although the fuselage was bigger.

The prototype featured a twin-tail tailplane, but the production variant used a conventional single tailplane.

Although the B-32 was designated as the fallback design in case the B-29 was delayed, it was the B-32 that experienced significant delays.

Problems with the pressurization systems, engine cooling issues, weak landing gears, and the gun turrets resulted in the schedule to get pushed further back.

Many of these problems were left unresolved, leading to operational changes once deployed.

7. The Pressurization System was Never Fixed

Like the B-29, the B-32 was meant for high-altitude bombing missions.

However, the problematic pressurization system from the prototype was never fixed.

Therefore, it was decided to do away with the pressurization system altogether, relegating the B-32 to low and medium altitude missions.

Several of the delays in the B-29 and B-32 programs were due to issues with the engines.

Problems with a lack of cooling and oiling issues plagued both aircraft during development.

The first production airframes weren’t delivered until September 1944, by which time the B-29 was already in combat.

Due to the success of the B-29, the developmental delays experienced by the B-32 were never addressed and production was significantly delayed, resulting in only 118 airframes being built.

The first B-32 combat missions weren’t flown until May, 1945 in the Philippines and Formosa (now Taiwan).

It was used as a bomber until late July, and then in a photoreconnaissance role in August, after the Japanese declared a ceasefire.

The photo recon missions were not without difficulties, though, which leads us to our next fact…

3. The B-32 Dominator Participated in the Last Air Battle of the War – After the War Ended

However, on August 18, 1945, a pair of B-32’s were flying a photo reconnaissance mission over Tokyo when they were attacked by over a dozen Japanese fighters.

Despite the damage, the B-32 was able to return to base, but not without a significant loss…

2. The B-32 Dominator Suffered the Last Air Combat Casualty of the War

During the attack, several crew members were wounded, including the photographer, Staff Sergeant Joseph Lacharite, who suffered severe leg wounds.

Lacharite’s assistant, Sergeant Anthony Marchione, tried to assist Lacharite, but was fatally wounded during the attack.

Sergeant Marchione was the last American to die in air combat during the war.

1. There are no Surviving Examples of the B-32

With the war ended, the B-29 proving successful and only 118 examples built, it was decided to stop production and to scrap the remaining airframes.

The last surviving B-32 Dominator was destroyed in 1949.

However, several of the unique A-17 turrets that were featured on the B-32 survive at museums around the country.

These are the only enduring legacy of the short-lived B-32 Dominator. 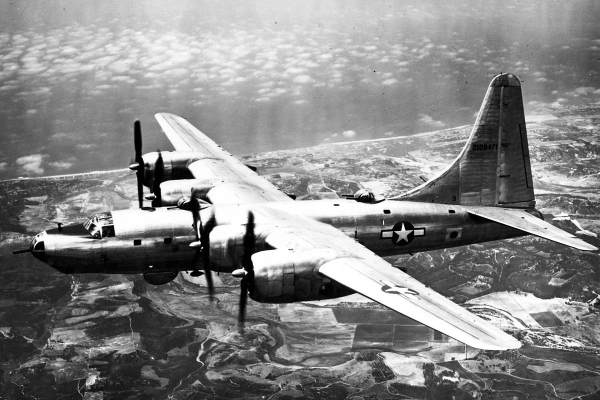 The B-32 Dominator had a very short life as a bomber aircraft. Here are 10 things you probably didn't know about the Consolidated B 32 Dominator.