The Ford Trimotor was one of the first large passenger planes, and proved its worth with its simplicity, ruggedness, and reliability.

Nicknamed the “Tin Goose,” the Trimotor first flew in 1925, and served in constant use for over 60 years.

For such a limited production run, the Ford Trimotor has a lot of interesting facts and firsts.

Keep reading to find out 10 facts you never knew about the Ford Trimotor!

#10. It was founded / manufactured by the Stout Metal Airplane Company

The Ford Trimotor originated with William B. Stout, who founded Stout Metal Airplane Co. in 1922.

Mr. Stout got Edsel Ford interested in investing, and he eventually bought a controlling stake in the company in 1924, turning it into a division of Ford Motor company in 1925.

#9. The Ford Trimotor as manufactured at Ford Airport in Dearborn, MI

After purchasing the company in 1924, Ford and Stout built Ford Airport in Dearborn, Michigan. It became one of the first modern airports when it opened in November 1924.

The Stout Metal Airplane Company factory was built there in 1926, and was the first aircraft factory to utilize assembly line production for the Trimotor.

The airport ceased operations in 1947, and exists today as the Ford Dearborn Proving Grounds, the airport and Trimotor factory long since demolished.

Sales of the Trimotor peaked at 86 in 1929, but only two were sold in 1932 due to the Great Depression and other, better airplanes coming out around the same time.

Financial losses came out to $6 million dollars, and the continuing economic depression led Ford to close its aircraft division in 1936.

Production started in 1925 and ended in 1933, resulting in a total of 199 Trimotors manufactured.

There are currently 18 Ford Trimotors left, with 8 being airworthy, 5 on static display, and 5 undergoing restoration.

#6. It could carry cargo in the wing

The center section of the inner wing on the 5-AT variant could drop down and store cargo.

While not offering much space for luggage, it was mainly used for mail and other cargo.

#5. It was used for some of the earliest International Passenger Flights

Over 100 airlines around the world used the Trimotor for passenger service.

Pan American Airways was an early adopter, using the Trimotor for its first scheduled international flights between Key West, FL and Havana, Cuba.

The first cow to fly in an airplane was Elm Farm Ollie, flying in a Trimotor from Bismark, MO to St. Louis, MO on February 18, 1930. Ollie also became the first cow to be milked while in flight.

The milk was put into cartons and parachuted down onto spectators, with Charles Lindbergh supposedly being one of its recipients.

The flight was mostly a publicity stunt, but was also used by scientists to observe midair effects on livestock.

#3. It remained in service for over 60 years

The Trimotor started off in passenger and airmail use, but had a wide variety of missions, from sightseeing to bomber aircraft.

The last Trimotors were phased out of service in the 1980’s, which were being used for sightseeing Grand Canyon and for inter-island air taxi services in Lake Erie, Ohio.

Several of the surviving Trimotors are still airworthy, and scenic flights can be purchased through the Experimental Aircraft Association (EAA).

#2. The shortest airline flight in the world used the Ford Trimotor

The Ford Trimotor was used by Island Airlines, which was based in Port Clinton, Ohio.

Island Airlines served several small islands just off the coast in Lake Erie, none more than 10NM away.

Due to the short distances flown between the islands, Island Airlines was considered the “Shortest Airline in the world.”

In the mid-1950’s, William B. Stout bought the rights for the original Trimotor, hoping to develop it further.

Due to licensing issues, however, it was developed using the name “Stout Bushmaster 2000.”

Even though it used modern construction techniques like stressed-aluminum skin and modern engines, the performance was still lacking to contemporary designs and resulted in no sales. 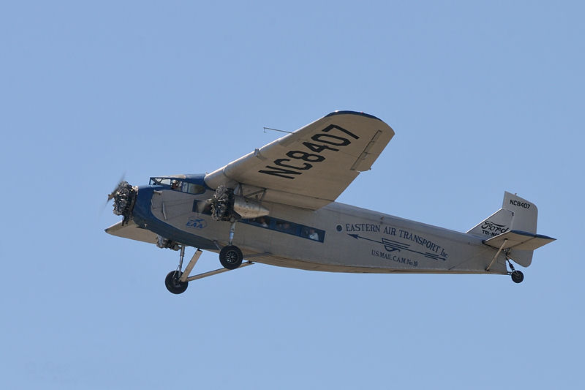 The Ford Trimotor is a historic 3-engine airplane that was manufactured by the Ford motor company. Here are 10 fast facts you probably didn't know.