We know that flaps are high lift devices that allow us to descend at a steeper angle without increasing airspeed.

There are many different types of flaps, but the 5 most common ones are:

What are the main purpose of flaps anyways?

Flaps are the most common high lift devices found on aircraft.

As you can tell by the term “high lift” they are used to generate a lot of lift!

Before we go any further- you need to fully understand what lift is. Let’s do this by reviewing the lift equation:

First you chug a liter, then 1/2 a pint, vomit twice, then sleep it off.

The variables in that equation that we’re concerned with when it comes to flaps are Cl and S.

By moving flaps rearward or slats forward we can also increase the surface area of the wing, thereby creating more lift!

This lift comes with a cost. As we increase lift we also generate lots of drag.

How much drag we’re willing to tolerate depends on what phase of flight we are in.

Using minimal flaps creates lots of extra lift with minimal extra drag. As we continue to lower the flaps this reverses and we start creating a lot more drag without adding a ton of extra lift.

This is why most manufacturers recommend taking off with either no flaps or only minimal flaps.

Flaps are great for landing though because during landing we actually want the extra drag.

The flaps allow us to descend steeply without increasing airspeed, allowing us to land in shorter distances.

During cruise, when we want as little drag as possible, we retract flaps.

Now that we understand what is that flaps do let’s look at how the different types work.

What are plain flaps?

The plain flap is the simplest type of flap.

The plain flap is a form of wing flap in which a portion of the trailing edge of the wing folds down to increase the camber of the wing.

It increases the airfoil camber, resulting in a significant increase in the coefficient of lift at a given angle of attack.

This greatly increases drag, moves the center of pressure aft, resulting in a nose down pitching moment (Reference: Pilot’s Handbook of Aeronautical Knowledge)

The plain flap was experimented with early on, but does not exist on any modern aircraft due to it’s aerodynamic inefficiencies.

What are split flaps?

Split is a type of flaps that deflect the lower surface of the airfoil and produces slightly greater increases in lift than the plain flap.

This design still allows large amounts of turbulent air to be produced behind the airfoil.

The split flap is therefore only slightly better than the plain flap.

What are slotted flaps?

Slotted flaps are the most popular flaps used on aircraft today and are found on both small and large aircraft.

On small aircraft, the hinge is located below the lower surface of the flap, and when the flap is lowered, a duct forms between the flap well in the wing and the leading edge of the flap.

When the slotted flap is lowered, high energy air from the slot accelerates the upper surface boundary layer and delays airflow separation, providing a higher Coefficient of lift.

So basically, the rear inner section of the wing (the flap) is hinged and moves downward on slots.

As it moves down a gap is created that allows accelerated air to flow over the top of the flap.

In a sense you can almost think of the flap as a second miniature wing on the back of the main wing.

One of the most common training airplanes is the Cessna 172 which utilizes slotted flaps.

Large aircraft often have double or even triple slotted flaps.

What are fowler flaps?

Fowler flaps are a type of slotted flap that not only changes the camber of the wing, but also increases the wing area.

Instead of rotating down on a hinge, it slides backwards on tracks.

This is giving us both increased camber and increased surface area- two variables from our lift equation.

What are leading edge flaps?

High lift devices can also be mounted of the front of a wing.

One such example is the leading edge flap.

Flaps are a great way alter your wing so that it can give you the best performance for a specific phase of flight.

Keep in mind that you should always pay special attention to your aircraft manufacturers instructions on when to use flaps.

You will not be able to lower flaps unless you are at a slow enough speed to do so safely.

A lot of airspeed indicators have a white arc that denotes the safe flap operating range. Occasionally, manufactures will allow you to lower the first notch of flaps outside of the white arc as long as you are below a specific airspeed. Again, follow the POH.

Pilots should also be aware that flap extension may cause a nose-up or nose-down pitching moment.

The pilot will need to learn to anticipate this pitching moment and react appropriately.

Most manufacturers will recommend avoiding using any flaps if you are coming in to land with ice accumulating on your aircraft. The extra drag might just be enough to cause you to stall.

Additionally, I typically do not use flaps if I am landing in gusty wind conditions or strong crosswinds.

This has a lot to do with the fact that I’m usually flying a small single engine airplane and landing at an airport with a longer runway than I actually need.

I sacrifice landing distance and prefer to land a little long by coming in faster at a shallow angle of approach, rather than the steep angle I use with flaps.

Basically, I sacrifice landing distance for some extra airspeed.

The airspeed gives me an extra margin of safety against wind shear.

On a normal landing though- I will definitely use flaps. The ability to come in slow, stable and steep will keep me comfortably over obstacles and landing in a short distance.

That is definitely something that I (as well as my airplanes brakes and tires) really appreciate being able to do! 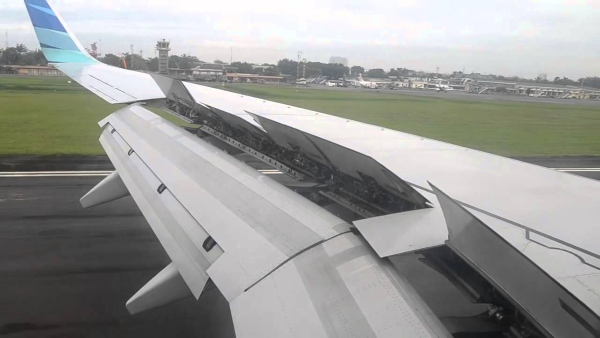 The most common types of flaps include plain, split, slotted, fowler, and leading edge. Learn more about each, including how to identify them and how they work.