Leafing through Jane’s, or geeking out about your favorite planes on Wikipedia, you may have noticed that some planes are said to have turbojet engines, and some have turbofans.

You might be wondering (and for good reason) what the differences are between each.

Throughout this article, we’ll give you a brief understanding of what each engine is, how it works, and explain their intricacies.

We’ll also talk about the different stages of a Turbojet engine, as well as give you a brief history of its origins.

Finally, we’ll get into the meat and potatoes of the article:

What’s the difference between a Turbojet and Turbofan engine?

Read on to learn more!

What is a Turbojet?

A turbojet is a type of gas generator, or more specifically, a gas turbine, which is essentially a continuous internal combustion engine.

They operate on the Brayton Cycle, a thermodynamic cycle which operates at constant pressure and extracts energy from heat provided. (Ref: 1)

There are generally three different stages to a gas turbine:

1. Compression stage – This is the stage in which incoming air is compressed by alternating moving and stationary compressor vanes. a

2. Combustion stage – The stage in which fuel is added and burned continuously.

3. Turbine section – This is the stage which extracts the energy released from the combustion stage.

The compressor and turbine are connected via a shaft that can spin between 10,000 and 25,000rpm.

The diagram below demonstrates the entire process:

Origins of the Turbojet Engine

French engineer Maxime Guillaume patented the first turbojet engine in 1921, however, his design was not pursued because the state of metallurgy was not advanced enough.

Materials that could withstand the high temperatures required in the turbine section had yet to be developed.

The first turbojet prototype was tested by Frank Whittle of the UK in 1937. (Ref: 2)

While the test was successful, Whittle did not impress the military at the time, and further development was slowed.

Von Ohain was able to impress aircraft designer Ernst Heinkel, who built a plane based around von Ohain’s engine.

This resulted in the first jet plane in existence, the HE-178, which made its first flight in 1939, just days before the start of WWII in Europe.

World War 2 was the catalyst for jet engine development. While Nazi leadership was initially seemingly unimpressed, von Ohain’s design was moved forward, resulting in the first operational combat jet fighter, the now-famous ME-262.

In the UK, Whittle was tapped to further refine his design, resulting in the Gloster Meteor, which made its combat debut in 1944, a few months after the ME-262 was introduced.

Related Article – History Of The Jet Age: Breaking The Sound Barrier And More

There are two main types of turbojets: centrifugal and axial.

Many early turbojets (like early Rolls-Royce engines) were centrifugal designs, similar to an automotive turbocharger.

The outlet of the compressor stage was generally perpendicular to the axis of rotation of the impeller.

The main downside to centrifugal turbojets is that they are large and wide for their thrust output.

Early jet planes were subsonic, so drag wasn’t as big of a consideration.

However, as planes got faster and new methods were developed to squeeze out every ounce of performance, minimizing cross-sectional area was paramount, which led to the switch to axial flow turbojets.

Axial flow turbojets compress the air parallel to the axis of rotation of the shaft.

While axial flow engines are generally longer than their centrifugal counterparts, this allows for smaller cross-sectional areas, which minimizes drag.

From an engineering standpoint, it also allows for more compressor stages, increasing the thrust and performance of the engine.

What is a Turbofan?

Turbofan engines are an evolutionary development from the turbojet.

They still operate using the same three principles and have the same 3 sections, compression, combustion, and turbine.

However, instead of just having a compressor section, the shaft is also connected to a large fan in the front which is surrounded by a duct.

Only part of the air being drawn into the fan is directed into the engine’s compressor stage, the rest of the air is expelled through the duct, which also acts as a nozzle, and around the main body of the engine.

The main reason for this development is for better efficiency. A large fan area increases the mass flow of the engine in relation to fuel burn.

The efficiency increase depends on whether a turbofan is either high bypass or low bypass.

A decrease in noise output is another reason to use turbofans.

A high bypass turbofan is usually defined as anything over a 2:1 ratio.

What this means is the two parts of air are drawn into the ducted portion (the “fan” part of the engine), while one part is drawn into the compressor stage of the classic turbojet part.

For an example of a high bypass turbofan, just take a look at the nearest airliner.

Almost every single airliner in service today uses a high bypass turbofan due to efficiency and noise reasons.

Low bypass turbofans have a bypass ratio of 2:1 or less.

These days, many military jet engines use these designs, as they combine the advantages of a pure turbojet engines with the extra efficiency of a turbofan.

Because the bypass ratio dictates the size of the fan, a low bypass ratio means a smaller fan, decreasing the diameter of the engine.

While the turbofan is just an extension of the turbojet, there are different reasons to use the different designs.

Having a large bypass ratio is desirable from a noise and efficiency standpoint.

A large fan, however, increases the amount of drag and decreases the maximum operating speed of the engine, limiting the exhaust velocity.

Switching to a low bypass design minimizes these limitations, leading to increases in engine speeds and exhaust velocity, while retaining the extra efficiency of a turbofan.

This is why most modern military aircraft use low bypass designs. It is a trade-off between performance and efficiency.

The fastest planes in existence, the SR-71, MiG-25, and the Concorde, all used standard turbojets.

The lack of drag from using a fan, and resultant lower cross-sectional area, means that it was much easier to optimize the aerodynamics for supersonic applications.

As with everything, though, there were trade-offs made.

These legendary planes were limited by poor fuel efficiency and, in the case of the Concorde, noise.

Flying over the Atlantic at Mach 2+ doesn’t bother many people, but climbing at full throttle over Manhattan made people upset, and the noise produced from its Olympus 593 turbojets was a large factor in it being retired.

Still, the two speed demons mentioned above, the SR-71 and MiG-25, used turbojets, and in military applications, noise isn’t a factor.

Both were Mach 3 capable (although the MiG-25 was engine limited to Mach 2.8) and both were used successfully in reconnaissance roles, able to fly fast and high.

Turbofans lose thrust as altitude increases and the air gets thinner, making high altitudes the realm of the turbojet.

The turbofan is a development from the classic turbojet, and in modern times, where efficiency in subsonic flight is desired, the turbofan is the choice if airplane designers.

For ultra-fast, ultra-high flying, the turbojet remains king of the air, being able to compress the thin air of the stratosphere better than a turbofan. 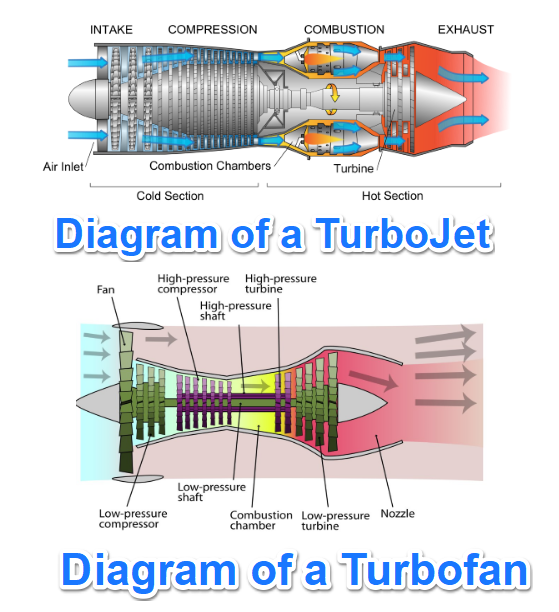 Learn more about Turbofan vs. Turbojet engines, including how they work, and the advantages & disadvantages of each.